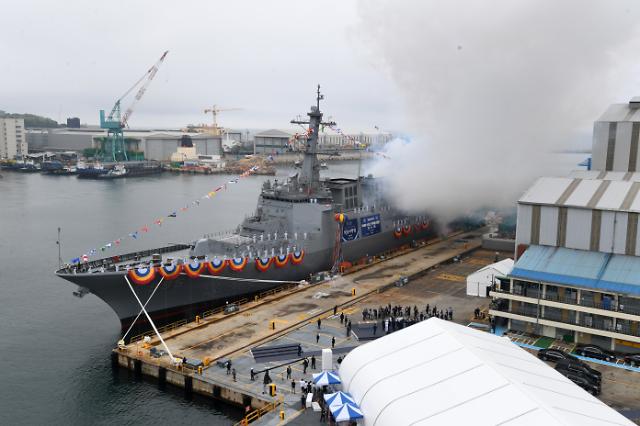 
SEOUL -- A 8,200-ton guided-missile destroyer featuring an Aegis combat system was launched in a ceremony chaired by President Yoon Suk-yeol, who described the new vessel as "a national strategic asset" with enhanced capabilities to intercept ballistic missiles and carry out anti-submarine operations.

The new Aegis destroyer named "Jeongjo The Great" has a strengthened stealth performance, a vertical launch pad for ballistic missile interception, and an advanced Aegis combat system to track and intercept ballistic missiles.

"Jeongjo The Great will further strengthen the Navy's combat capabilities as a national strategic asset with the ability to detect, track, and intercept ballistic missiles based on a state-of-the-art combat system," Yoon said in a ceremony on July 28 at the shipyard of Hyundai Heavy Industries (HHI) in the southeastern port city of Ulsan.

The new Aegis destroyer is 170 meters long and can sail at a speed of up to 30 knots, or 55 kilometers per hour. Compared to its previous Aegis ship, the first KDX-III Batch II destroyer has enhanced capabilities to intercept ballistic missiles and carry out anti-submarine operations.

South Korea's KDX program calls for the construction of three classes of destroyers, starting with a 3,800-ton vessel commissioned in 1998. So far, 12 destroyers have been built, including three KDX-III Batch I Aegis ships armed with Hyunmoo-3C cruise missiles with a range of up to 1,000 kilometers. HHI built the lead ship of the 7,600-ton Batch I Aegis ship in 2007 and the third one in 2011.

The 8,200-ton KDX-III Batch II program requires more electrical power, a high level of automation and an improved combat system capable of detecting and tracking targets at greater distances and with more precision. 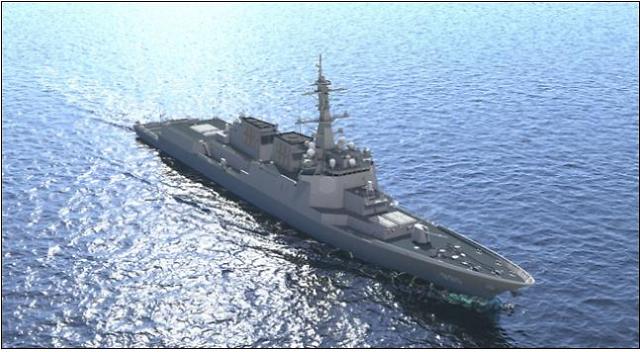 The new destroyer was installed with four gas turbine engines and a fuel-saving auxiliary propulsion system consisting of two 1.7 megawatts-class electric motors. It can carry MH-60R Sea Hawk helicopters to be introduced in 2024.

Using a vertical launch system, the new destroyer will be able to fire long-range ship-to-air missiles such as SM-6, a missile system developed by U.S. aerospace and defense company Raytheon, and ship-to-ground ballistic missiles for long-range precision strikes against strategic targets.

South Korea has tried to build large warships equipped with sophisticated missile-defense systems. Six KDDX-class (KDX-IV) stealthy destroyers will be built by 2030. The 6,000-ton "mini Aegis" will have cruise missiles, advanced sensors, a missile defense system and stealth characteristics, all built with pure domestic technologies. They will use a new system that improves stealth capabilities, along with multifunction radars to detect missiles, aircraft and the surface of the sea at the same time.