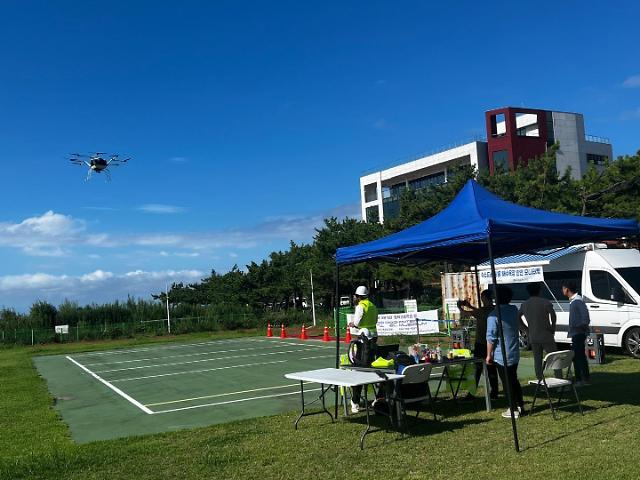 SEOUL -- To prevent various safety accidents, South Korea's southern resort island of Jeju deployed a hydrogen fuel cell drone to a famous beach visited by about 200,000 people every year. The safety drone can notify visitors using a speaker in case of an emergency and drop a lifeguard rescue tube to save a drowning person.

Hydrogen fuel cell drones are more advantageous in the operating time and flight distance than battery-powered unmanned flying vehicles because hydrogen fuel cells are light and able to maintain stable high power during flight. Unlike battery-powered drones that can fly for 30 minutes to one hour, hydrogen drones can normally fly for more than two hours.

Jeju City said in a statement on August 8 that a hydrogen fuel cell drone was deployed to Hamdeok Beach in northern Jeju to prevent safety accidents such as jellyfish threats. Using video images provided by the drone in real-time, a drone control center can quickly respond to emergencies after detecting abnormal situations.

The drone will not fly above holidaymakers enjoying their vacation to avoid safety accidents and prevent personal information exposure. Jeju said it will be operated only in dangerous spots. Depending on the result, the use of the safety drone will be expanded to other beaches.

"We will efficiently operate the drone to prevent safety accidents as the number of visitors to beaches in Jeju is increasing," Jeju future strategy bureau head Yoon Hyung-seok was quoted as saying. Using artificial intelligence, Jeju will develop a new technique so that drones can independently identify and analyze dangerous situations without the need for a video analyst at the control tower.

Safety drones are used in many cities in South Korea. In May 2022, drones equipped with cameras and radars were adopted in the southwestern coastal city of Boryeong to prevent safety accidents on a tidal flat where many visitors collect seafood. In 2017, three people died while collecting shellfish on the tidal flat.