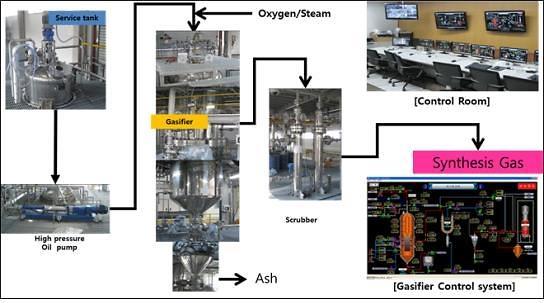 Gasification converts organic or fossil-based carbonaceous materials in high temperatures, with a controlled amount of oxygen or steam into carbon monoxide, hydrogen, and carbon dioxide. The resulting gas mixture is called syngas or producer gas used as the hydrogen source in fuel cells.

Based on a gasification technology using hydrocarbon-based raw materials, a research team from the Korea Institute of Energy Research (KIER) has produced syngas with a hydrogen and carbon monoxide ratio of more than 90 percent from waste plastic pyrolysis oil, which has limited use.

"This technology transfer is commercializing our gasification process design and operation technology developed with our own technology. It is expected to greatly contribute to the construction of a resource circulation economy for carbon neutrality by resourcing waste plastics into high-value-added products," said Ra Hol-won, a KIER researcher.

Pyrolysis is a time-taking process using extreme heat and pressure to break down long-chain hydrocarbon plastic waste into shorter-chain hydrocarbons that can be reused in the petrochemical industry as source materials including high-quality oil. Recycled oil is processed into medium crude and light oil to be used in the production of lubricants and fuels.