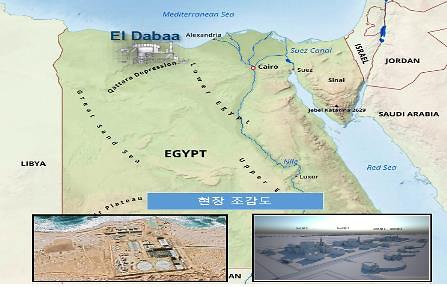 
SEOUL -- South Korea's nuclear power industry regards a war between Russia and Ukraine as a rare opportunity to bounce back from the path of decline, buoyed by a crucial deal to join the construction of Egypt's first nuclear power plant at the hands of a Russian state company without being bounded by U.S.-led international sanctions.

The $30 billion project will see the construction of four nuclear reactors by Atomstroyexport JSC (ASE JSC), an engineering company of Russia's state corporation, Rosatom. It was South Korea's biggest nuclear power plant export since 2009 when a KHNP consortium won a $20 billion contract to build the Barakah nuclear power station in the United Arab Emirates.

KHNP will take part in the project in Egypt as a subcontractor, but it's big enough to stir jubilation and an early hope, especially among South Korean government officials who have actively implemented a new energy roadmap unveiled in July 2022 to jack up the ratio of electricity generated by nuclear power plants in South Korea's energy mix to more than 30 percent by 2030.

In its background report, the Ministry of Trade, Industry and Energy admitted that the process of checking the U.S. position was necessary because the main contractor was a Russian company. Ministry officials found that KHNP's participation was not subject to sanctions as it will provide turbines that convert heat from reactors into electrical energy.

Minister Lee Chang-yang pledged full government support for South Korea's nuclear power industry to secure more orders abroad.  "There are many countries such as the Czech Republic and Poland that appreciate the excellence of Korean nuclear power plants and seek nuclear cooperation."

"The Ukraine crisis raised an energy crisis in Europe, opening a nuclear power plant market and giving us a competitive advantage in future orders," 2nd Vice Minister Park Il-jun told reporters. "If our country gains trust through Egypt's nuclear power plant project, I think other countries that are pushing for nuclear power plants will also refer to this."

The new energy roadmap endorsed by the administration of President Yoon Suk-yeol on July 5 highlighted internal and external uncertainties such as the Russia-Ukraine war that disrupted a global energy supply chain and prompted major countries to reset their energy policies.

The roadmap tolled the death knell for a "nuclear-exit" policy adopted by Moon Jae-in, a liberal ex-president who has prioritized the establishment of infrastructure for renewable energy and a hydrogen economy in an effort to achieve net-zero carbon dioxide emissions and decrease the number of nuclear power plants to 14 in 2038.

The presidential office advertised KHNP's participation in the El Dabaa project as the first major achievement of Yoon who has vowed to actively revitalize South Korea's struggling nuclear power industry.