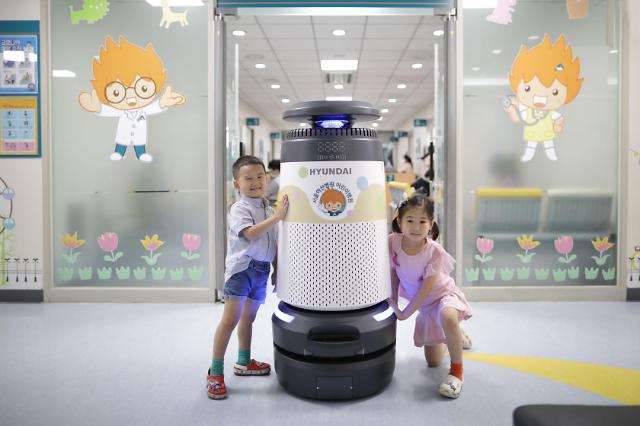 SEOUL -- While South Koreans are patiently enduring through a never-ending pandemic, Hyundai Robotics, a robot maker affiliated with South Korea's Hyundai shipbuilding group, deployed two quarantine robots, capable of improving air quality and removing harmful bacteria and viruses, to one of the largest hospitals in Seoul. Robots can autonomously avoid obstacles and navigate to their destination.

Hyundai Robotics said in a statement on August 30 that two autonomous quarantine robots will carry out various tasks at Asan Medical Center located in southeastern Seoul. The hospital is visited by some 13,600 people daily. The quarantine robots, capable of disinfection without damaging human bodies, will be operated 24 hours a day at the hospital. Despite the hospital's large floating population, they can carry out quarantine tasks without colliding with people.

"We will continue to take the lead in this field through the development of various service robots by considering how they can be used in the real-life environment," an unnamed Hyundai Robotics official was quoted as saying.

South Korea has become one of the world's largest testing grounds for autonomous serving robots thanks to its 5G mobile communication networks. In July 2021, the operator of Incheon International Airport, South Korea's main gateway, deployed two disinfection robots and six quarantine guiding robots to its second terminal to cope with the spread of COVID-19.

In April 2021, a quarantine robot called "BINU" developed by SK Telecom, a leading mobile carrier in South Korea, made its commercial debut at Yongin Severance Hospital operated by Yonsei University in Yongin, some 35 kilometers (22 miles) south of Seoul. BINU measures the temperature of visitors by identifying their faces with artificial intelligence technology and examines whether they wear masks.