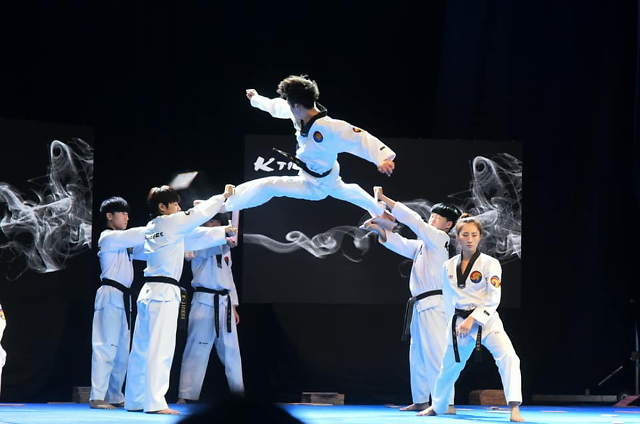 K-Tigers has steadily gained popularity overseas for covering many different dance performances of famous K-pop groups such as BTS, EXO and Le Sserafim. The group has some 1.4 million subscribers on YouTube. In July 2022, the group incorporated taekwondo movements in "Fearless," the dance song by Le Sserafim, a girl group formed by Hybe's music label. The dance cover garnered more than 1.2 million views on YouTube.

K-Tigers will perform in Gwanghwamun Square at 7:00 p.m. on September 2. The iconic square located in central Seoul is one of the Seoulites' favorite places to visit during the weekends with their family members, especially young children, as there are many museums and attractions nearby. The event will be held to celebrate Takewondo Day which is September 4. Performance teams from Kukkiwon, the official taekwondo governing body, and Lachica, a dance team that competed in a famous dance audition program called "Street Woman Fighter," will also perform at the event.

"I hope this Gwanghwamun performance will be an opportunity to get greater love from domestic and foreign tourists," Seoul's tourism and sports bureau director Choi Kyung-ju said in a statement. Seoul said a taekwondo-themed contemporary art exhibition will be available for four days starting on September 1.

Taekwondo is recognized as a fun and friendly sport in South Korea. It is practiced by many elementary students hoping to learn self-defense techniques and boost confidence. In April 2021, Taekwondowon, South Korea's main taekwondo academy in Muju some 180 kilometers (111 miles) southeast of Seoul, adopted virtual reality and augmented reality technology for tourists and trainees to learn martial arts skills with a virtual instructor. Users can engage in person-to-person competitions wearing special headsets.