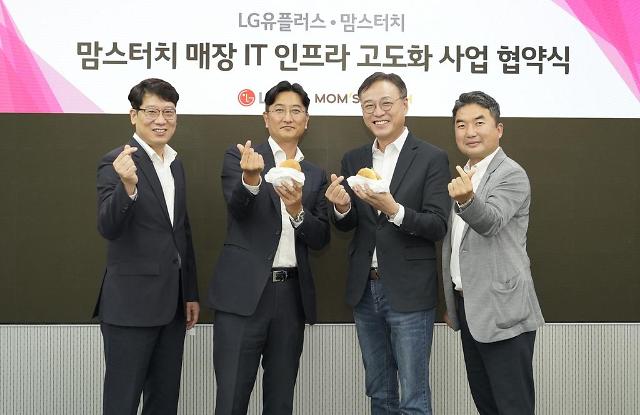 Mom's Touch was launched in 2004 to tap South Korea's fast food market dominated by foreign brands such as KFC, McDonald's, and Burger King. However, the local franchise was able to receive customers' attention in the early 2010s for its affordable price, which was about 70 percent of other foreign franchises' products, and menus localized to match South Koreans' tastes. The fried chicken burger franchise has the largest number of stores in the industry with some 1,350 stores across the country as of June 2021.

LGU+ said in a statement on August 31 that the company signed a memorandum of understanding with Mom's Touch to provide super-fast internet cable network and 4G mobile communications services to burger stores. Using the fast internet service, store owners can monitor and efficiently operate their shops, the mobile carrier said. Also, a dedicated troubleshooting center for Mom's Touch stores will be set up to help store owners in case of communications network malfunctions.

In the future, LGU+ will install smart closed-circuit TV (CCTV) cameras that are capable of analyzing the status of stores including the recognition of customers' faces and emergency situations at Mom's Touch stores.

"Because communications infrastructure is becoming an important aspect in the operation of stores, this partnership will become an opportunity for Mom's Touch to provide convenience for store owners and customers," Mom's Touch's operation support division head Moon Soo-hyun was quoted as saying.