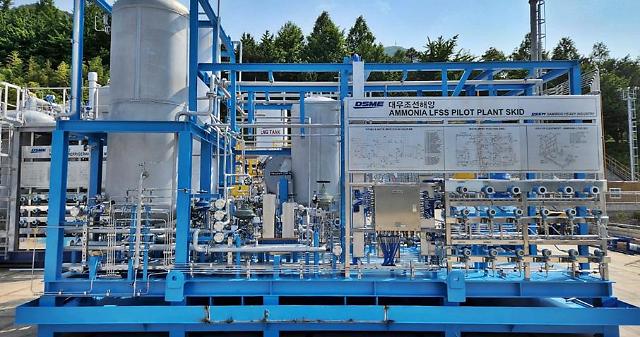 SEOUL -- Daewoo Shipbuilding & Marine Engineering, a major shipbuilder in South Korea, has been selected for a state project to develop and commercialize an eco-friendly tugboat based on a hydrogen fuel cell engine by 2026 In response to tightened international regulations on green gas emissions generated by ships.

Daewoo Shipbuilding & Marine Engineering (DSME) said that the fuel cell tugboat project being pushed by the Ministry of Oceans and Fisheries would cost about 23.5 billion won ($17.4 million). The shipbuilder would develop a hybrid propulsion system of up to three megawatts.

Most of the tugboats in operation in South Korea do not meet carbon emission standards required by the International Maritime Organization (IMO),  a U.N. maritime safety agency. An LNG fuel-powered tugboat deployed for pilot service in 2021 has caused economic problems.

DSME is involved in the development of an ammonia fuel supply system for a mixed combustion engine for ships. "We will focus on securing technological competitiveness to dominate the eco-friendly ship market by carrying out hydrogen fuel cell-based and ammonia-fueled ships," DSME's research center head Choi Dong-kyu said in a statement on September 1.

Two days ago, DSME tied up with its domestic rival, Samsung Heavy Industries (SHI), and HSD Engine, a domestic ship engine maker, for joint research to develop next-generation eco-friendly engines that use methanol, ammonia, or hydrogen as fuel. Ammonia is seen as a suitable ship fuel for the post-carbon era due to its stability in supply and relatively easy storage and transportation.

South Korea has accelerated the development of hydrogen-powered ships. In September 2021, the Hyundai shipbuilding group tied up with AVL, an Austrian engineering company that provides solutions and methodologies to shape future mobility trends, to develop hydrogen fuel cells for ships by 2025.