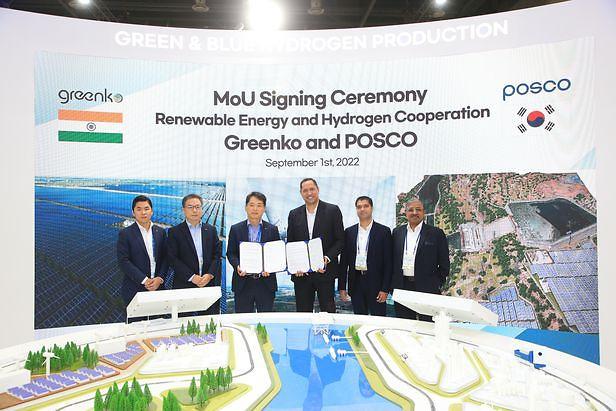 SEOUL -- POSCO partnered with Greenko, a renewable energy company in India, to push for the establishment of a business model for the production of green hydrogen and ammonia. India has abundant solar and wind resources. The steel group has tried to develop technologies for extracting large amounts of hydrogen from ammonia and supplying green hydrogen to power stations and industrial facilities.

Green hydrogen does not use any fossil fuel during its manufacturing process. Ammonia is produced through a chemical reaction between hydrogen and nitrogen at high pressure and temperatures. They are considered an important part of a sustainable ecosystem.

Under a memorandum of understanding signed at a trade fair on the northwestern outskirts of Seoul, POSCO Holdings and Greenko will carry out a feasibility study on green hydrogen production after discovering a proper site by the end of 2022. Greenko, which is majority owned by Singapore's sovereign wealth fund GIC, runs about 7.5 gigawatts capacity of renewable energy facilities in India.

POSCO Holdings said that the production of green hydrogen and ammonia in India will be based on pumped-storage hydroelectricity, which generates electricity by pumping and storing water into a high-lying reservoir at night and dropping water in the daytime when power consumption is high.

"Through cooperation with Greenko, we will successfully establish a green hydrogen production model in India and prepare to supply green hydrogen and ammonia that are required in South Korea and Europe," POSCO Holdings' hydrogen business head Cho Joo-ik said in a statement on September 1.

In July 2021, a six-member consortium including POSCO was launched in South Korea to establish a green ammonia value chain covering production, maritime transportation and storage. POSCO's business model is to decompose water into electricity made of renewable energy to produce green hydrogen, synthesize it into ammonia, and extract hydrogen again from ammonia.