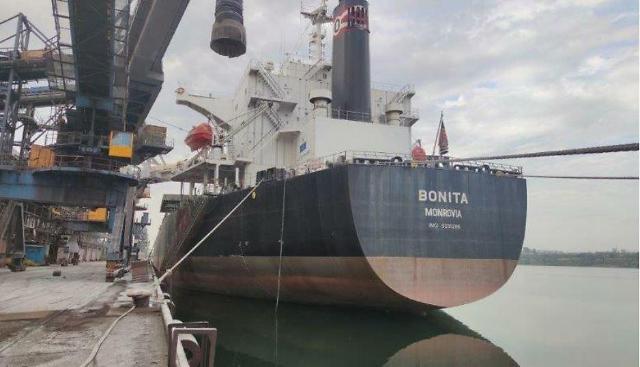 SEOUL -- With the departure of a grain ship carrying some 61,000 tons of corn for animal feed, POSCO International, a trading arm of South Korea's steel group, has solved a bottleneck in the shipment of grain from Ukraine, one of the world's key breadbaskets. Grain produced in Ukraine has piled up in silos due to Russia's blockade of Ukraine ports that sent global food prices soaring.

Grain ships were able to leave Ukrainian ports under a plan brokered by the UN and Turkey in late July. POSCO International said that its grain ship left Pivdennyi Seaport in the Ukrainian city of Yuzhne near Odesa on August 16. The ship is to arrive in a port west of Seoul in late September.

The resumption of grain exports is expected to help ease global inflation as the Ukrainian government expects to export more than three million tons of grain per month, said POSCO International, which runs a major grain terminal in Mykolaiv, also known as Nikolaev, which is an important transportation hub of Ukraine.

POSCO International said that the shipment of corn from Ukraine is a meaningful example of how private companies can contribute to South Korea's food security and price stabilization. "We will continue to expand overseas grain imports and contribute to domestic food security and price stability," an unnamed POSCO International official said in a statement on September 5.

In 2019, POSCO International acquired a controlling 75-percent stake in a grain terminal run by Orexim Group, a leading transshipment and exporting company in Ukraine. Through its grain terminal, the South Korean company had exported some 2.5 million tons of grain to South Korea, Europe, North Africa and the Middle East until February when its marine grain transportation came to a sudden stop.

POSCO International has reported no damage to its terminal. It is the first South Korean company to have the operating rights of a grain export terminal abroad that would contribute to the food security of South Korea, a major grain importer.