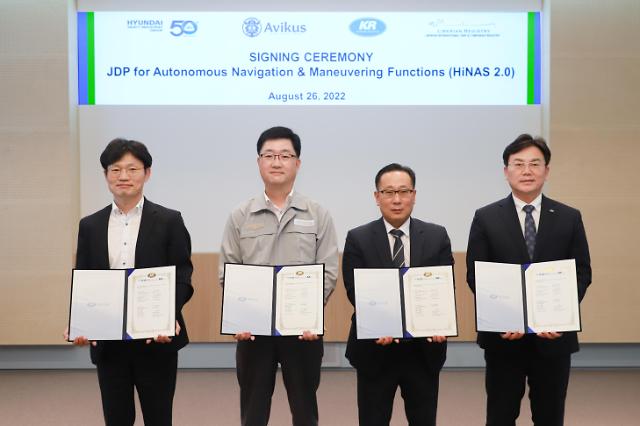 
SEOUL -- With the purpose of preoccupying the market, South Korea's Hyundai shipbuilding group will work with a domestic maritime classification society to advance the commercialization of an autonomous navigation system developed by the group's in-house venture, Avikus, which has tested its technology using a giant natural gas carrier for a transoceanic voyage.

Korean Register (KR) said that it has signed a joint development agreement with Hyundai Heavy Industries, Avikus and the South Korean office of Liberian International Ship & Corporate Registry (LISCR), an international marine services company, for the application of an autonomous navigation system to actual ships.

Avikus has developed an advanced voyage support system called HiNAS and an intelligent berthing assistance system called HiBAS. HiNAS automatically recognizes surrounding vessels through camera analysis to alert the risk of collision based on augmented reality. Even when visibility is not secured, infrared cameras comprehensively provide information such as the location and speed of obstacles.

HiNAS 2.0 is an upgraded two-stage system that creates an optimal route and navigation speed. Artificial intelligence issues steering orders in real time by recognizing the surrounding environment such as weather and wave height. The system increases fuel efficiency by seven percent and reduces greenhouse gas emissions by five percent.

KR said that the goal is to install HiNAS 2.0 on LISCR-registered ships and others by July 2023. "Based on the results of this study, we will contribute to dramatically enhancing the safety and economy of ships by successfully commercializing HiNAS 2.0," said Avikus CEO Lim Do-hyeong.

In June 2021, a 12-seat cruise boat equipped with Avikus' self-sailing system made a safe test voyage covering 10km without direct human intervention through a narrow canal in the southeastern industry port of Pohang. The boat was able to cope with various unexpected situations using special cameras and lidar which measures distance by illuminating the target with laser light.

A year later, a 300-meter-long super-large liquefied natural gas (LNG) carrier installed with a self-sailing system developed by Avikus completed its autonomous ocean crossing in a joint operation with SK Shipping, a domestic shipping company, under real-time monitoring by KR and the American Bureau of Shipping (ABS) for objective verification.

The ship had crossed the Pacific Ocean for 33 days, starting from Freeport, a port city on the Gulf of Mexico, on May 1 and covering a total of 20,000km with half of the distance operated autonomously. Avikus aims to commercialize HiNAS 2.0 in the second half of 2022.

South Korean shipbuilders work hard to develop smart ship technologies that can be divided into unmanned ships ruled by an operator from a control center onshore and autonomous ships which use a computer on board that takes decisions about the route, speed, fuel consumption, maintenance and even mooring in the harbor.