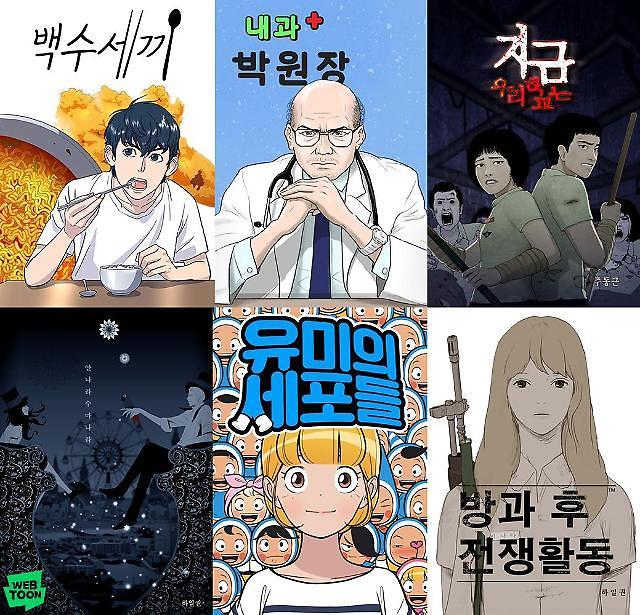 SEOUL -- Webtoons, also known as webcomics, are digital comic books optimized for smart device ecosystems. South Korea is the birthplace of webtoons in the early 2000s and K-webtoon content has been recreated into various world-popular content formats including films, dramas and novels. Netflix's popular survival drama series "Squid Games" was based on a webtoon.

At a seminar in Seoul on September 15, experts attributed the stellar growth of South Korean webtoons to well-made platforms, effective creator-building policies, and technical support that played a crucial role in producing excellent creators and reflecting what readers want quickly.

"The growth environment centered on platforms is one of the important reasons why the webtoon industry got bigger," said Park Hyuk-tae, who heads an industry policy team at the Korea Creative Content Agency (KOCCA), a government agency charged with governing cultural content. "Writers can freely serialize their works on platforms and get paid for their creation, and readers can pay and enjoy webtoons they want anytime, anywhere."

Along with an ecosystem that allows writers to create high-quality webtoons, webtoons have gained global popularity thanks to the overseas expansion of platforms, Park said, adding a COVID-19 pandemic accelerated the growth of the webtoon market. According to global market research firm MarketResearch, the world's webtoon market will grow at an average annual growth rate of about 30 percent to reach about $26.2 billion in 2028.

Webtoon service models are based on a free-to-read system in which readers can pay digital coins to read the latest episodes of comics or web novels. Naver Webtoon, the webcomics wing of South Korea's web service giant Naver, recorded sales of 1.5 trillion won ($1.07 billion) in 2021.

"It is more valuable to create a market for webtoons, not just exports of intellectual property," Kwak Kyu-tae, a professor of global business at Soonchunhyang University, said, calling for a careful growth strategy tailored to the characteristics of each region. "To become a platform loved by people around the world, not just South Korea, we should be prepared in advance for various disputes that will arise in each region in the future."

Naver Webtoon has stepped up efforts to protect the webtoon ecosystem through the introduction of Toon Radar, a tool to prevent illegal distribution, that inserts invisible user identification information into images and blocks the first leaker. AI Painter is a service that allows webtoon artists to create works with the help of AI technology and helps color paintings with a single click.

On top of that, Naver Webtoon is developing an automatic drawing tool that would help anyone become a webtoon artist even if he or she lacks drawing skills. The goal is to secure more diverse works by lowering the threshold of becoming a webtoon artist. "When used in actual creation, I believe it will be able to reduce the overall work time up to 50 percent," said Seo.

Naver Webtoon was credited with translating the properties of platforms such as curation, network, personalization, and participation into a digital comics service, said Lee Dae-ho, a professional of interaction science at Sungkyunkwan University. "We were able to confirm that Naver Webtoon is providing positive value to users," he said, adding that the webtoon platform has a positive effect on the entire ecosystem in that more users can see better works.

Citing a survey of creators, Kim Jung-hwan, a professor of mass communication at Pukyong National University, found that the platform provided various opportunities to expand intellectual properties. "Creators were found to have made positive evaluations in various categories such as Naver Webtoon's technology, profit distribution, the size of users, and reliability."

"The positive evaluation of Naver Webtoon led to loyalty to the platform," Kim said, pointing to Naver Webtoon's policy to leave the door open for the debut of competent creators by systemizing challenge comics and official serialization.