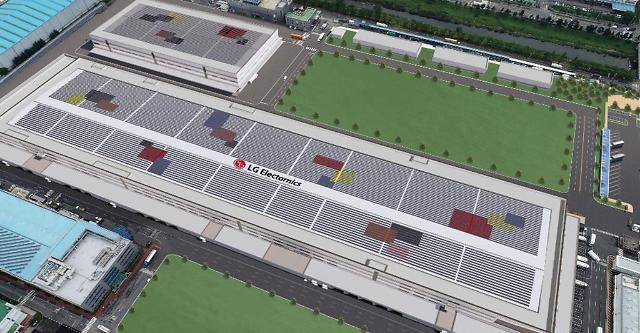 SEOUL -- LG Electronics partnered with GS EPS, a private power generation company, to build a 20,000 square meter wide solar power plant, which is the size of three soccer fields, on the rooftop of its factory. The project can reduce greenhouse gas emissions by about 3,000 tons annually.

GS EPS will install and run the solar plant on the roof of LG Smart Park, a production based in Changwon some 300 kilometers (186 miles) southeast of Seoul. The power plant can produce about 6,600 megawatt-hours, which can replace more than 10 percent of the annual electricity used in LG Smart Park's integrated production building. Construction will be completed by 2025.

The solar power plant will be operated through a direct power purchase agreement (PPA), in which power suppliers and users directly trade electricity without having to go through state power transmission and distribution networks. The method has been approved by the government to revitalize Renewable Energy 100 (RE100), an initiative seeking to source 100 percent of electricity consumption from renewables and accelerate change toward zero-carbon grids.

"By consistently pushing for the conversion of renewable energy at major workplaces, we will provide a differentiated customer service unique to LG Electronics through premium products that even consider the environment," LG Electronics official Park Pyong-gu said in a statement on September 19. The company aims to convert all energy sources used by every domestic and foreign business site to 100 percent renewable energy by 2050.

In March 2022, LG Smart Park was selected by the World Economic Forum, an international non-governmental and lobbying organization based in Switzerland, as a new "lighthouse" facility that demonstrates leadership in applying advanced technologies like cloud computing, big data and artificial intelligence. It is South Korea's third lighthouse factory after those run by POSCO and LS Electric.