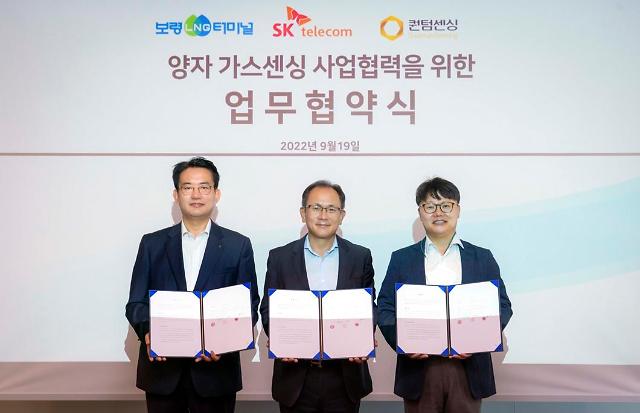 
SEOUL -- SK Telecom, a leading mobile carrier in South Korea, will lead South Korea's first project to demonstrate a quantum-based gas sensing system that can detect gas leaks in real time at a major liquefied natural gas terminal, using a single photon detector with an ultra-sensitive sensitivity that can detect even a small amount of light.

SK Telecom (SKT) said it has signed a memorandum of understanding with Boryeong LNG Terminal and Quantum Sensing, a domestic optical instrument manufacturer, to install a gas sensing system next year at an LNG storage tank located in Boryeong, some 130 kilometers (80 miles) southwest of Seoul. SKT will supply key components and lead the localization of equipment through collaboration with Quantum Sensing.

Quantum sensing detects protons and converts them into electrical signals. Quantum sensing describes the use of a quantum system, quantum properties, or quantum phenomena to perform a measurement of a physical quantity. It provides new opportunities, especially with regard to high sensitivity and precision, in applied physics and other areas of science.

A quantum sensor utilizes properties of quantum mechanics, which have optimized precision and beat current limits in sensor technology. The field of quantum sensing deals with the design and engineering of quantum sources and quantum measurements that are able to beat the performance of any classical strategy. Quantum sensors have applications in a wide variety of fields.

"By applying quantum technology to the domestic gas safety field, we will present a new paradigm for gas safety," SKT's chief development officer Ha Min-yong said in a statement on September 20. "We will expand the application to gas production bases and various sites at risk of gas leakage, and expand it to environmental fields that detect various environmental gas leaks."

Until now, chemical reaction or infrared ray-based gas leakage methods have been used to monitor large gas facilities. When installed outside, the detection ability of conventional methods was reduced due to the influence of the wind, and the detection distance was short, making it difficult to measure the concentration of gas.

Quantum gas sensing can determine various information such as the concentration and volume of gas by measuring the number of light grains from reflected waves that return after shooting a laser at a leaking gas, SKT said, adding that it can also identify the shape of gas leakage through laser scanning, allowing real-time monitoring from the point of gas leakage to the direction of diffusion.

SKT's subsidiary, ID Quantique (IDQ), a Geneva-based leader in quantum-safe cryptography and quantum sensing solutions, will supply a single photon detector called "ID Qube," a key component corresponding to the laser receiver of quantum gas sensors, that has an ultra-sensitive sensitivity and can detect even a small amount of light.

A consortium led by SKT has been selected for a state project to establish and operate a pilot infrastructure for quantum cryptographic communication. The project is to secure the stability of emergency communication networks in key industrial facilities such as nuclear power plants and strengthen the protection of key data and personal information held by public institutions.