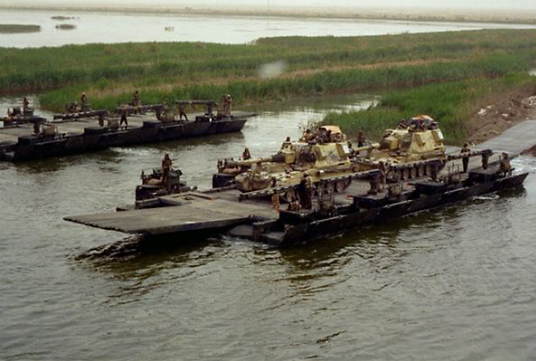 SEOUL -- With technology transfer from a foreign company based in Germany, South Korea started the production of a new type of self-deployable military equipment that can be used as a bridge or as a ferry to transport weapon systems, troops and supplies over water when permanent bridges are not available.

The first self-propelled, amphibious bridging vehicle was produced on September 20 under a localization program that costs some 530 billion won ($381 million) by 2027, according to the Defense Acquisition Program Administration (DAPA), a state body controlled by the defense ministry.

Hanwha Defense has led the project to improve the performance of South Korea's old wet-gap crossing equipment called the U.S. Ribbon Bridge System (RBS), which is a modular, aluminum-alloy, and continuous floating bridge system consisting of interior and ramp bays.

The new amphibious bridging vehicle enables quick river crossing and works properly even during rainy seasons. Unlike RBS, which requires about six hours of preparation time, the new equipment can reduce installation time by 60 to 70 percent. The number of operating soldiers can be reduced by up to 80 percent.