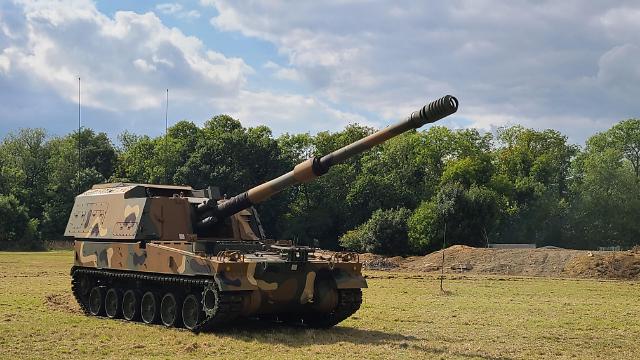 
SEOUL -- K9A2, the most advanced version of Hanwha Defense's self-propelled gun K9 Thunder, has arrived in Britain for its international debut to bolster a bid for a British arms acquisition program. It comes at a time when the need to outpace and outfight adversaries has been reinforced by recent geopolitical events such as a war between Russia and Ukraine.

K9A2 will be displayed at DVD, a biennial Defense industry exhibition to be held on September 21~22 at UTAC Millbrook in Bedfordshire. This is the first show of the newest variant of K9 Thunder, the most popular and proven tracked artillery system in the world. K9A2 has been proposed for Britain's Mobile Fires Program (MFP).

There are over 1,700 units already in service with seven NATO and allied nations, including Turkey, Poland, Norway, and Estonia. More recently, Australia and Egypt have joined the K9 user community, bringing the number of countries to nine, while Poland has signed a framework agreement to procure over 600 more.

K9A2's British variant will be equipped with a composite rubber track, coupled with higher levels of tactical mobility and automation, Hanwha Defense said, adding that it will be capable of firing up to 10 rounds per minute, with just three crewmembers.

As part of its commitment to a long-term partnership with Britain, Hanwha Defense has created Team Thunder, a partnership of defense companies, including Lockheed Martin UK, Leonardo UK, Pearson Engineering, Horstman Defence Systems and Soucy Defense from Canada.