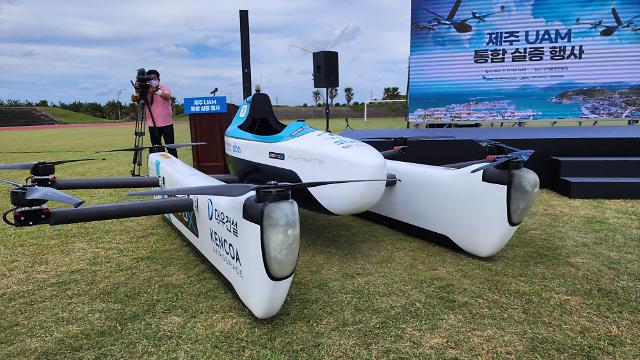 SEOUL -- A one-seat personal air vehicle capable of setting down on land and water made a short unmanned test flight on South Korea's southern resort island of Jeju in a demonstration event that revealed a long-term strategy to turn the island with good airport facilities and infrastructure into a test bed for urban air mobility.

A personal air vehicle (PAV) developed by Kencoa Aerospace, a domestic supplier of materials used in space and aircraft, was mobilized for an unmanned demonstration flight at a stadium in Jeju City on September 21. The event did not yield satisfactory results due to strong winds that forced the multi-copter with eight rotors to land in about a minute after only a short low-altitude flight from side to side.

The multi-copter with space for one person to ride like a fighter cockpit can be boarded by one person is 4.595 meters wide, 4.145m long, and 1.155m high. Through further test flights to secure safety, Jeju provincial government officials will try to open an air taxi service for tourists in non-urban low-density areas.

With the aim of commercializing urban air mobility (UAM), an ecosystem involving flying passenger vehicles in urban areas, Jeju is pushing for logistics delivery and the emergency transportation of patients with personal air vehicles. As a leading tourist destination, the island was seen as an ideal test bed for air taxis due to its good airport facilities and well-maintained traffic infrastructure.

South Korea aims to commercialize drone taxis in 2025. A consortium involving SK Telecom and Hanwha Systems aims to launch a pilot UAM service in 2025 in Jeju by linking the island's international airport and major tourist attractions. The goal is to build a foundation for operating UAM in a complex urban environment.