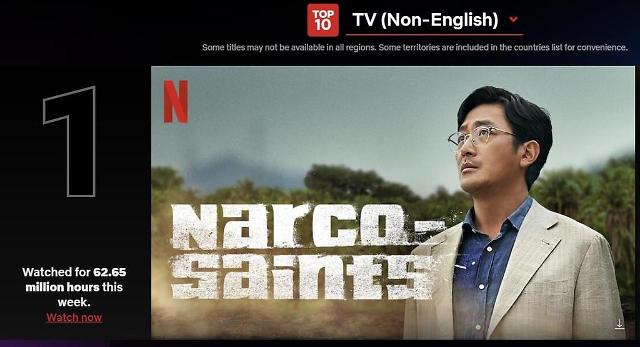 The over-the-top (OTT) media service said that "Narco-Saints" garnered some 62.6 million hours of viewing during the week of September 12 to 18. It is far higher than "Fate: The Winx Saga season 2," the second-mostly watched English TV series on Netflix with some 48.9 million hours of viewing. Narco-Saints became the most watched show in many countries including India, Malaysia and Singapore.

"Extraordinary Attorney Yoo," another South Korean TV drama that has topped Netflix's non-English chart for seven consecutive weeks, fell to fourth place with some 21.9 million hours in the third week of September.

Narco-Saints stars Ha Jung-woo, a versatile actor who appeared in the record-breaking fantasy blockbuster "Along With the Gods" and Hwang Jung-min, a veteran actor known to be extremely talented in melting into various types of characters. Hwang has taken the main role in hit films such as "Ode to My Father" (2014) and "Veteran" (2015).