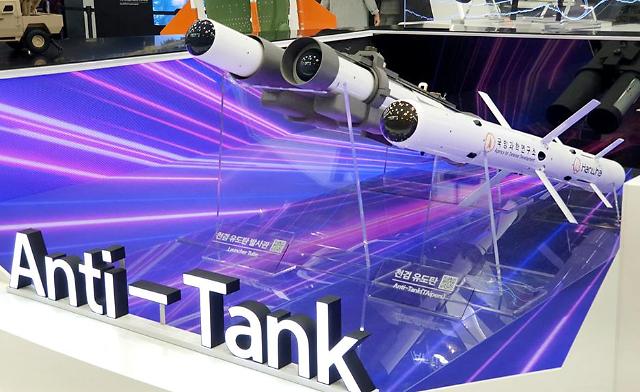 SEOUL -- Cheongeom, a homemade air-to-ground guided missile that would replace TOW anti-tank missiles, has been displayed at a defense exhibition in western Seoul, along with a light-armed helicopter that will be deployed for combat missions in 2023. The missile is equipped with a visual and infrared dual mode seeker for day-and-night operations.

Cheongeom, also known as TAipers, adopted a tandem warhead capable of breaking explosive reactive armor and LIG NEX1's seeker.  When launched from a helicopter, Cheongeom with a flight range of eight kilometers is guided by wire through an optical cable. If necessary, it is automatically guided to fire and forget. The missile weighing 35kg is 1.7 m in length and 150 mm in diameter.

Cheongeom was developed by the research center of Hanwha Corporation in a military project led by the Agency for Defense Development (ADD). It will be installed in 200 light-armed helicopters (LAHs) to be produced by Korea Aerospace Industries (KAI) to replace an aging fleet of MD500s and AH-1S Cobra.

The development of KAI's light attack helicopter began in 2015, based on H-155, a twin-engine helicopter created by European aircraft maker Airbus. KAI released an LAH prototype in 2018 to assess its effectiveness and suitability for combat. The LAH model carrying a 20mm machine gun and four anti-tank missiles or 70mm rocket pods is capable of flying at a maximum speed of 324 km (201 miles) per hour.