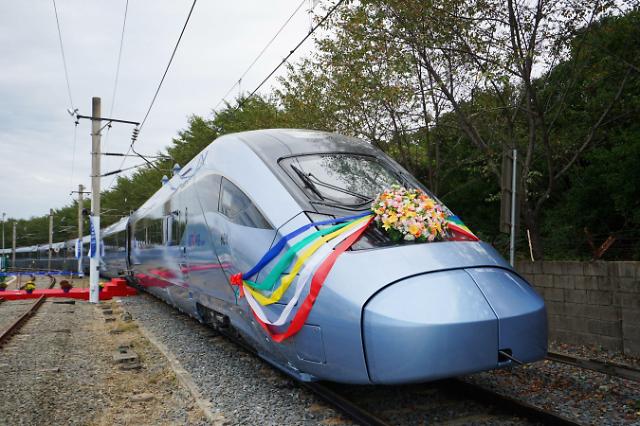 SEOUL -- Hyundai Rotem, a subsidiary of South Korea's Hyundai auto group, rolled out its first high-speed electric multiple unit called "EMU-320" capable of running at a maximum speed of 320 kilometers (198 miles) per hour. The train based on a distributed power system will be operated on high-speed railways after a test run.

EMU-320 has eight cars with a total of 515 seats and features distributed traction with driving trailers at each end and six powered intermediate cars just like KTX-Eum, a six-car unit train that made a commercial debut in January 2021. KTX-Eum runs at a maximum speed of 260km per hour.

Unlike previous trains that have power units only in the front and rear, multiple unit types with a distributed power system are more advantageous in acceleration and deceleration as they distribute power sources to all cars. They are efficient in the domestic railway environment which has many curved sections and short distances between stations.

EMU-320 was rolled out in a delivery ceremony on September 27 at Hyundai Rotem's factory in the southern city of Changwon. Through EMU-320 high-speed vehicles, Hyundai Rotem said the domestic railway sector would grow further. The second EMU-320 train will be released in November 2022 for operation by the Korea Railroad Corporation (KORAIL), a public railway operator in South Korea.

According to data released by market research firm Statista, the global multiple-unit train market is projected to reach more than 14 billion euros ($13.4 billion) by 2024. "We will do our best to make inroads into the global market for our localized EMU-320 trains," said Hyundai Rotem CEO Lee Yong-bae.

With EMU-320, Hyundai Rotem hopes to tap the overseas high-speed train market, especially in Turkey and Thailand. The long-term goal is to participate in the construction of an inter-Korean railway line that links with a Eurasia railway project. South Korea has proposed an ambitious project to set up a transportation network connected with trans-continental railways. However, the project has been shelved due to cross-border tensions.