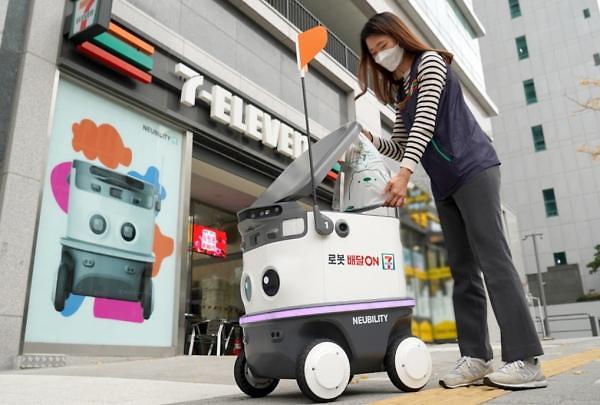 SEOUL -- A short-range delivery service using multiple autonomous robots equipped with cameras and sensors will be tested at multiple outlets run by the South Korean operator of 7-Eleven convenience stores for three months in an affluent residential area in southern Seoul after an earlier test operation ended without any particular problems.

The new operation is to begin on September 28 to test a service remotely controlled and monitored by a control center, with three robots used jointly at various convenience stores in Bangbae-dong. Customers living within a radius of 800 meters can use the service through an app.

For its first three-month test operation that began in November 2021 in the same district, just one delivery robot was deployed to a 7-Eleven store to seek how the robot operates in urban environments intertwined with obstacles such as pedestrians and street poles. The robot built by Neubility, an autonomous robot startup in South Korea, covered a radius of 300m.

Various autonomous robots are being tested in South Korea with a food and grocery delivery market to reduce labor costs. Some robots are able to communicate with elevators so that they can call a lift to move up and down floors inside a building. Autonomous drones have been tested in open areas such as parks to deliver food and groceries.

As it is hard to receive satellite positioning data in a concrete jungle, Neubility's robot uses cameras instead of a GPS system to navigate in urban environments even in hard weather conditions such as rain and snow. "We will focus on upgrading services to achieve innovation in the last mile delivery market and do our best to provide reliable self-driving delivery demonstration services," Neubility CEO Lee Sang-min said.