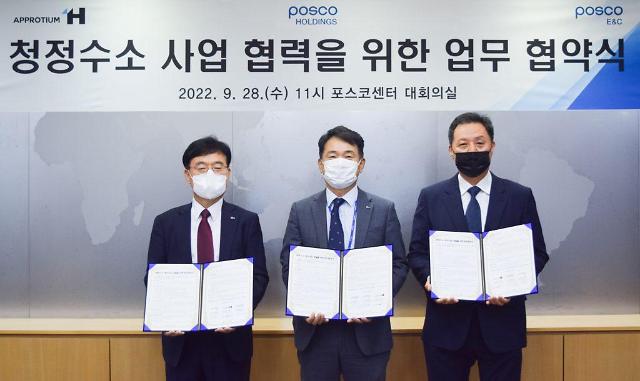 
SEOUL -- South Korea's steel group, POSCO, joined hands with Approtium, a domestic hydrogen producer, to jointly push for a blue hydrogen business based on carbon capture utilization and produce 40,000 tons of hydrogen annually. They will promote joint research on the overseas production of blue ammonia for use in South Korea.

Blue hydrogen is produced by applying carbon capture and storage to reduce CO2 emissions. The steel group has tried to develop technologies for extracting large amounts of hydrogen from ammonia and supplying green hydrogen to power stations and industrial facilities. Green hydrogen does not use any fossil fuel during its manufacturing process. Ammonia is considered an important part of a sustainable ecosystem.

POSCO said it would invest more than 200 billion won ($139 million) in natural gas reforming and carbon dioxide collection facilities by 2026 to produce hydrogen. Carbon dioxide generated in this process will be recovered and used as industrial raw materials such as semiconductor process gas and dry ice. "This business cooperation will be a touchstone for domestic clean hydrogen production using carbon capture utilization," POSCO Holdings' hydrogen business head Cho Joo-ik said in a statement on September 28.

The group's holding company, POSCO Holdings, is in charge of procuring natural gas, which is used as a raw material for hydrogen while producing and selling clean hydrogen. It will produce more than 950 gigawatts hour of electricity annually through cooperation with a power generation company by introducing mixed combustion power generation technology.

POSCO E&C will design and engineer clean hydrogen production facilities. Approtium will be in charge of operation and management as well as the liquefaction and sale of collected carbon dioxide.