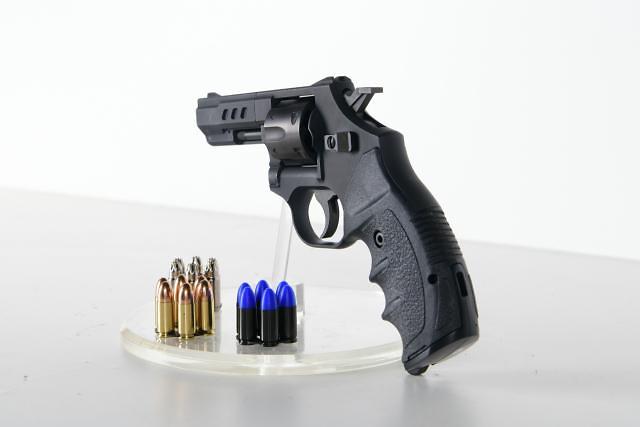 SEOUL -- To efficiently overpower smugglers and illegal Chinese fishermen without using excessive force, South Korea's coastguard is considering the adoption of a "smart" revolver capable of firing non-lethal bullets which are less affected by strong winds. It is more effective than tasers or gas guns, which are difficult to use at sea.

The non-lethal handgun brand-named "STRV-9" was developed by SNT Motiv, a leading firearms manufacturer in South Korea. STRV-9 uses three types of ammunition -- blank, non-lethal and live ammunition. It automatically stores information such as the number of bullets, firing angle, location and the time of shooting through a computer program. The power of non-lethal ammunition is one-tenth that of live ammunition.

Originally, STRV-9 weighing 550 grams (1.2 pounds) was developed at the request of police to minimize casualties from the use of 38-caliber revolvers. A safety test has been completed, and the National Police Agency (NPA) would introduce 100 STRV-9s in 2023 for a pilot operation.

"We've considered adopting it because the National Police Agency introduced it first," Kim Hoon, a coastguard official in charge of equipment, told Aju Business Daily on September 29. He stressed that the adoption of STRV-9 is possible only if the police complete an on-site test operation.

South Korea has incessantly captured and fined Chinese boats for illegal fishing. Coastguard operations were risky as Chinese fishermen sometimes used steel pipes, knives and other weapons, triggering violent clashes that have caused casualties on both sides. Three Chinese fishermen were killed in 2016 when a fire broke out during a raid by coastguard commandoes using stun grenades.

SNT Motiv has produced pistols, assault rifles, automatic grenade launchers, sniper rifles, and machine guns for South Korean troops. The company refused to disclose the price of STRV-9 and other details. Lee Ki-hoon, an SNT Motiv official, said that the same type of handgun has been exported to an unnamed Middle East country.