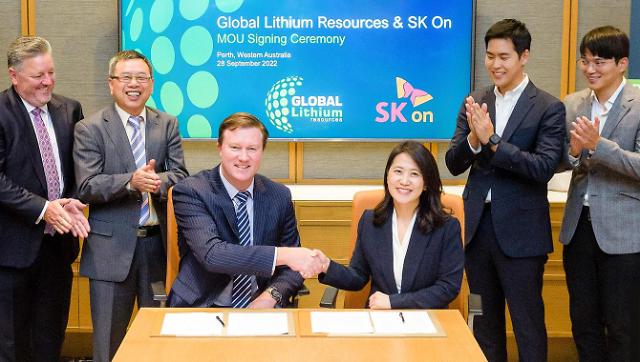 [Courtesy of SK on]

SEOUL -- Australia is a supplier of important minerals used for electric vehicle batteries and other products in South Korea, but a non-profit trade organization in Seoul suggests that companies should step up efforts to diversify supply lines and avoid risks from their reliance on China.

The Korea International Trade Association (KITA) said in a report that the proportion of lithium imports from China rose to 59 percent in 2021 from 47 percent a year ago. South Korea's reliance on Chinese lithium deepened in 2022, with lithium imports from China standing at $1.61 billion in the first seven months of 2022, up 471 percent from the same period last year.

China accounted for 64 percent of  South Korea's total lithium imports from January to July this year, followed by Chile with 31 percent, KITA said, citing Australia and Argentina as promising alternative suppliers. Australia is a major producer of lithium and other core minerals such as nickel and cobalt.

Well before the implementation of an inflation reduction act (IRA) that only subsidizes electric vehicles using more than a certain percentage of core minerals produced by the U.S. or countries that have signed free trade agreements with Washington, South Korean companies have tried to diversify their supply lines to reduce their dependence on China for key raw materials.

In December 2021, South Korea's steel group POSCO disclosed a scheme to invest some $830 million in producing lithium hydroxide, an inorganic compound used for electric vehicle batteries, from a salt lake in Argentina. A production plant with an annual capacity of 25,000 tons will be completed in the first half of 2024.

POSCO has purchased lithium mining rights in the lake from Australian lithium miner Galaxy Resources for $280 million. A dedicated POSCO factory will be built in the southern industrial port city of Gwangyang by 2023 to manufacture 43,000 tons of lithium hydroxide annually.

In May 2021, POSCO acquired a 30 percent stake in a nickel mining and smelting company in Australia for $240 million. Under a deal with Canada's First Quantum Minerals, the steel group would receive 7,500 tons of nickel in mixed hydroxide precipitate (MHP) per year, beginning in 2024. MHP consists of mostly nickel hydroxide but also contains valuable cobalt hydroxides and various other impurities.

Financial terms were not given, but SK on said it would get a chance to purchase a stake in a production project being pursued by Global Lithium. "This agreement will serve as an opportunity to strengthen SK on's global productivity and sustainable growth," SK on's strategy manager Ryu Jin-suk said in a statement on September 29.