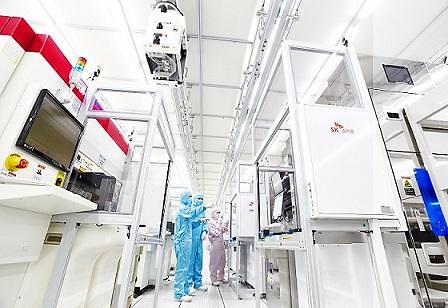 
SEOUL -- Undaunted by a global economic slowdown and inflationary pressure weighing down the demand for memory chips, SK siltron, a wafer company affiliated with South Korea's SK Group, is pushing ahead with an aggressive expansion of its production capacity. A wafer is a thin round slice of semiconductor material used for the fabrication of integrated circuits and other devices.

Silicon wafers are available in a variety of diameters. The diameter of wafers has gradually increased to improve throughput and reduce cost. As concerns about insufficient return on investment delay the transition to 450 mm wafers, there is an increasing need for 300 mm (11.8 inch) wafers used for higher-performance chips.

In a board meeting on September 29, SK siltron was allowed to invest some 855 billion won ($597 million) in new production facilities for 300 mm silicon wafers. The construction of a new wafer factory that cost 1.49 trillion won began in March in the southern city of Gumi. The company said its new investment is designed to gain an upper hand in global competition.

SK siltron thinks about additional investments worth 400 billion won in the first half of next year, bringing to 2.3 trillion won the total amount of investments for five years. The move followed a decision by SK hynix, a major memory chip producer controlled by SK Group, to build a new domestic semiconductor plant worth some 15 trillion won for completion in early 2025.

SK siltron, which offers polished wafers, solar substrates, and crystal ingots to electronics manufacturers, organized a silicon and carbide (SiC) wafer technology forum with 10 suppliers in June 2022 to share information and discuss a concerted goal of enhancing their competitiveness through cooperation.

While demand for SiC-based power semiconductors is soaring, their supply is limited due to oligopoly by a small number of companies in Germany, the United States, and Japan. The company acquired DuPont's SiC wafer business for $450 million in 2019 and established a U.S. subsidiary named SK siltron CSS in Michigan. The U.S. subsidiary would expand the production of SiC wafers for electric vehicle power system components, including power converters, chargers and inverters.

SK siltron would expand its line to high-value-added products such as SiC-based gallium nitride (GaN) semiconductors with high power density and voltage breakdown limits. As a shortage in a disrupted global supply chain highlighted the strategic importance of automotive semiconductors, the Seoul government has pushed for research into semiconductors using new materials such as GaN.