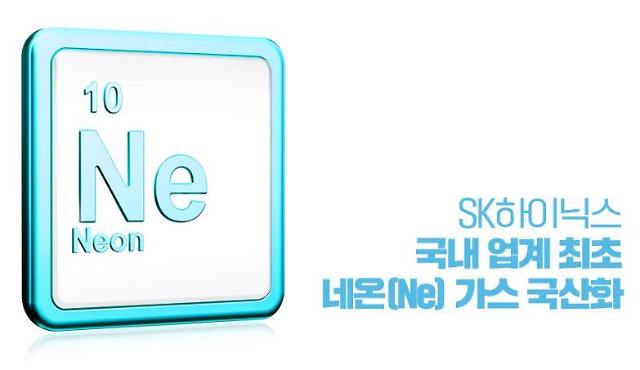 
SEOUL -- SK hynix, a major memory chip producer in South Korea, has expanded the proportion of homemade neon gas to 40 percent in semiconductor production since a localized facility was completed in early 2022 to preemptively address the risk of supply and demand instability. The company will fully use domestic neon by 2024.

Neon is a raw material for excimer laser gas which is used in semiconductor photolithography, a process of engraving electronic circuits on silicon wafers using ultraviolet rays with short wavelengths. An excimer laser is a form of ultraviolet laser that typically uses a combination of noble and reactive gases.

South Korea has been heavily dependent on imported neon and other rare gases, which are essential for semiconductor production. A large-scale air separation plant is required to collect neon, which is sparse in the air. South Korea's steel group POSCO has worked with TEMC, a domestic semiconductor gas producer, to produce neon gas at a low cost by utilizing POSCO's large air separation device.

TEMC has refined the extracted neon gas, and the technology has been verified by SK hynix. "This a case that contributed greatly to stabilizing supply and demand through cooperation with domestic partners even in unstable supply situations," Yoon Hong-sung, head of SK hynix's raw material repurchase division, said in a statement on October 5.

POSCO's neon production facility in the southern industrial port city of Gwangyang is cable of producing about 22,000 normal cubic meters of high purity neon every year, which is enough to cover 16 percent of domestic demand. Normal cubic meter (Nm3) is used to represent the amount of natural gas in the gas industry. TEMC has secured long-term purchase rights.

POSCO, which nurtures the production of rare gases as a new growth engine, will work with domestic companies to localize facilities for xenon and krypton used in etching.