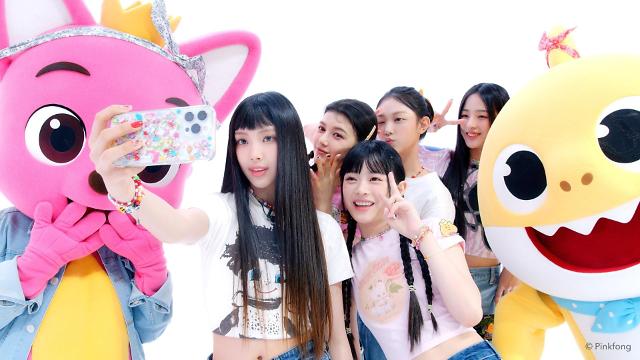 SEOUL -- NewJeans, a rookie girl group formed by a subsidiary label of the agency of K-pop superstar BTS, will collaborate with a South Korean educational entertainment company that created famous characters such as Baby Shark, to release dance content. The five-member group gained attention through its debut song, "Attention," released on August 1.

As part of a project to mesmerize young fans through spectacular dance performances by K-pop idols and dance crews, NewJeans will release various content with Pinkfong Company's characters. "We hope the well-matched collaboration of Pinkfong, Baby Shark and NewJeans, which generated a new K-pop syndrome, will bring great joy to millennials and Gen Z as well as global fandom," an unnamed Pinkfong official said in a statement on October 6.

Pinkfong has collaborated with various artists including CL and Aiki. The company aims to accelerate its market invasion in Japan through collaboration with Nonoka Murakata, a four-year-old Japanese singer who garnered attention for her outstanding performance at a nursery contest. The educational entertainment company is preparing to host a live performance in 2023 in Japan.

Baby Shark depicts a story about a family of great white sharks with colorful visuals and a catchy melody. The original version, uploaded in late 2015, made a phenomenal hit worldwide and has tens of versions in many languages. The "Baby Shark Dance" video uploaded in 2016 is now one of the most-watched on YouTube.

NewJeans was formed by ADOR under command of Min Hee-jin, a former SM Entertainment creative director who has planned concepts for famous girl groups such as Girls' Generation, f(x) and Red Velvet.