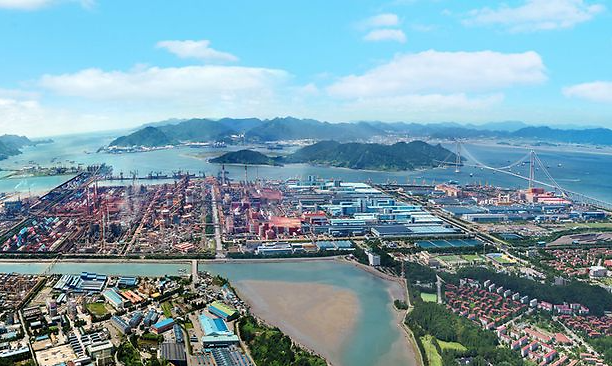 SEOUL -- South Korea's top steelmaker POSCO has joined a task force to utilize by-product gas generated by steel mills as a plastic raw material with carbon capture utilization technology that captures waste carbon dioxide and transports it to a storage site for recycling.

Research on the development of low-carbon olefin manufacturing technology that can reduce carbon dioxide emissions by about 15 percent compared to existing technologies will be conducted for three years until 2025. The project requires a research fund of 25.2 billion won ($18 million).

An integrated process will be developed to synthesize methanol using carbon monoxide extracted from by-product gas generated from POSCO's furnace, decompose it simultaneously with naphtha, and manufacture olefin, which is the basic raw material for plastic. Naphtha is produced from petroleum distillates, natural gas condensates and the distillation of coal and peat.

A ceremony took place on October 5 at the state-run the Korea Research Institute of Chemical Technology in the central city of Daejeon to launch an industry-academic joint research center that also involves Lotte Chemical and LG Chem, as well as college and state research teams.

POSCO and the Research Institute of Industrial Science & Technology (RIST) will develop technologies to selectively extract carbon monoxide from by-product gases in steel mills, while the Korea Institute of Energy Research (KIER) will be in charge of manufacturing hydrogen-rich syngas gases by reforming compressed natural gas (CNG). The Korea Research Institute of Chemical Technology (KRICT) will establish a process to manufacture olefin and use it as a plastic raw material.

"This project is even more meaningful as we can contribute to reducing carbon emissions in the petrochemical sector using steel resources through the research," POSCO's industrial gas business promotion head Jeong Seok-mo said in a statement on October 6. Starting in 2023, the demonstration of technologies will be conducted in POSCO’s steel mill in the southern city of Gwangyang.

According to data released by global market research firm Allied Market Research, the global carbon capture, utilization and storage (CCUS) market is expected to grow from $1.9 billion in 2020 to $7.0 billion in 2030. In November 2021, the Seoul government unveiled a 1.4 trillion won ($984 million) scheme to develop technology related to CCUS by 2030.