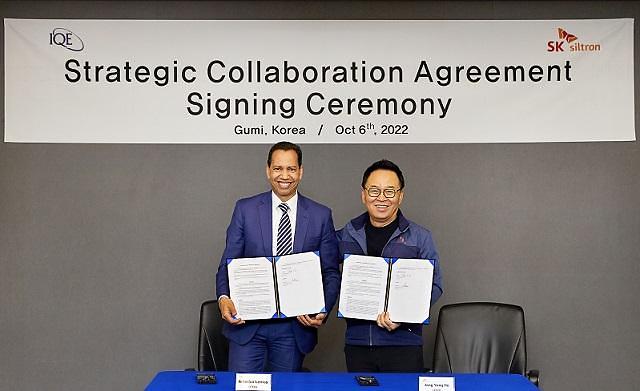 Epitaxy refers to a type of crystal growth or material deposition in which new crystalline layers are formed with one or more well-defined orientations with respect to the crystalline seed layer. The deposited crystalline film is called an epitaxial film or epitaxial layer.

The two companies would cooperate to jointly develop customized gallium nitride (GaN) wafers, which have a high power conversion efficiency even in a high voltage environment and are used in various fields such as electric vehicles, smart devices, and 5G-based high-speed network equipment that require high power and heat resistance such as fast charging.

SK Siltron said the two companies have laid the foundation for expanding the Asian market through the joint development and marketing of GaN wafers. IQE and SK siltron would focus on developing innovative epiwafers based upon GaN on silicon carbide (SiC) for radio frequency applications in the wireless communications market and GaN on silicon (Si) for power electronics applications across a range of markets.

A wafer is a thin round slice of semiconductor material used for the fabrication of integrated circuits and other devices. SK siltron offers polished wafers, solar substrates, and crystal ingots to electronics manufacturers. "We are delighted that two world leaders in advanced materials are joining forces to jointly develop products for exciting growth markets related to GaN materials,” SK siltron CEO Jang Yong-ho said in a statement on October 11.

The agreement leverages SK siltron's substrate expertise with IQE's market-leading epitaxy capabilities. "There are tremendous synergies between IQE’s GaN pedigree and SK siltron’s substrate offerings, and we will leverage these to bring innovative solutions to market," IQE CEO Americo Lemos said, adding that expansion in Asia is a key focus for IQE.

While demand for SiC-based power semiconductors is soaring, their supply is limited due to oligopoly by a small number of companies in Germany, the United States, and Japan. The company acquired DuPont's SiC wafer business for $450 million in 2019 and established a U.S. subsidiary that would expand the production of SiC wafers for electric vehicle power system components.

As a shortage in a disrupted global supply chain highlighted the strategic importance of automotive semiconductors, the Seoul government has pushed for research into semiconductors using new materials such as GaN.