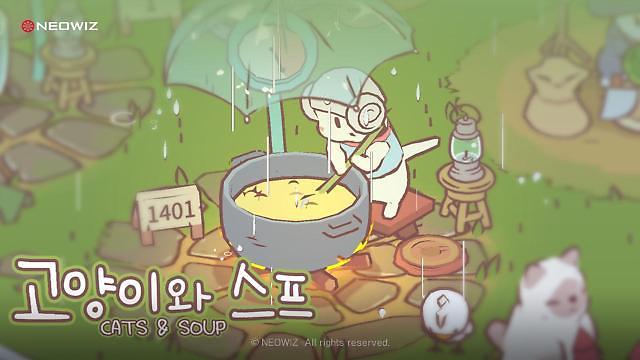 SEOUL -- "Cats & Soup," a mobile game created by South Korea's online game publisher Neowiz, will become the first Korean game to be played on the world's most popular video platform Netflix. Users will be able to enjoy the clicker game, which requires players' simple actions such as repetitive clicking, without spending their time on in-game advertising and in-app purchases.

In Cats & Soup, various cats cook and sell different food such as soup and fried dishes in a forest. The game has surpassed 27 million cumulative downloads since its release in July 2021. Using its characters, Neowiz will also issue non-fungible tokens (NFTs) certified by blockchain as unique digital assets that are not interchangeable.

Neowiz's mobile game will be rolled out on Netflix in November 2021 after getting rid of in-game advertising and in-app purchases. In-app purchase is a marketing method for game developers to gain profits by selling items or characters within a mobile gaming app. While Neowiz is in charge of game updates and maintenance, Netflix will publish content all over the world.

Netflix has been accelerating its game business through the acquisition of many gaming companies. In September 2022, the video platform operator teamed up with France-based video game company Ubisoft to provide three mobile games including an adventure game based on World War I.