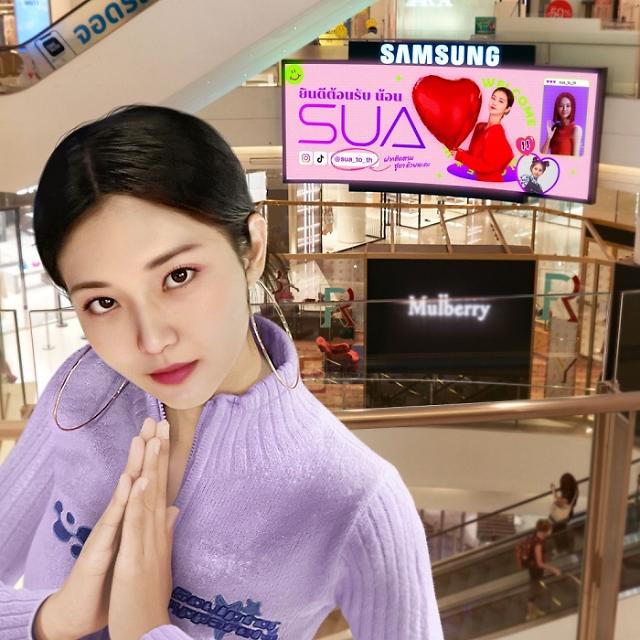 SEOUL -- Sua, a digital human modeled after a K-pop star, made its international debut as an advertising model who will appear on large billboards and electronic boards installed in landmarks in Thailand. Sua is South Korea's first virtual human to enter Thailand.

Sua's founder, On Mind, said that it has signed a three-year exclusive contract with Dynamic Digital Display (DDD), a digital signage display supplier based in Thailand, to actively support Sua's activities in Thailand and other Southeast Asian countries. On Mind is a 3D virtual human development wing of Neptune, a mobile game and software company affiliated with South Korea's web service company Kakao.

"Through this opportunity, we will spare no effort to raise awareness of the status of South Korean technology while showcasing the high utilization and star quality of Sua in Southeast Asia," an unnamed On Mind official said in a statement on October 14.

Sua is the first virtual human in South Korea to have real-time interactions based on a cross-platform game engine developed by Unity Technologies. Its advantages are facial expressions similar to humans, natural movements, and friendly charm.

In September 2022, SK Telecom (SKT), a top mobile carrier in South Korea, selected Sua as a model to advertise its AI service. Unlike other virtual human-based advertisements that relied on voice actors' dubbing, Sua can deliver messages using its own voice created through AI-based voice synthesis technology. This is the first time that a virtual human has been adopted as SKT's advertising model.