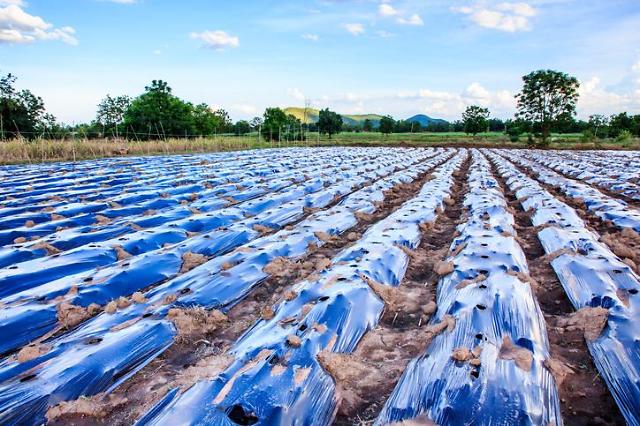 
SEOUL -- South Korean researchers have developed a biodegradable polyester material using fertilizer ingredients. The plastic can be degraded in ambient natural conditions at a temperature of 25 degrees Celsius (77 degrees Fahrenheit). Developers regard the new material as ideal for the production of mulching films, also known as mulch films, which are used in farms to stop the contamination of crops and soils.

There is high global attention to eco-friendly plastic materials, but they are shunned in many countries because they are not really environmentally friendly and more expensive than conventional plastics. They require an artificial in-soil fertilization environment with temperatures that are higher than 60 degrees Celsius to start the degradation process. In ordinary environments, they are basically not decomposable.

The National Research Foundation of Korea said that a team of researchers from Ajou University has developed polyesters that can be rapidly degraded in ambient natural environments. The polyesters were composed of ionic aggregates of fertilizer ingredients (phosphorous) and exhibited about 920 percent higher biodegradability than conventional biodegradable plastics.

"The fertilizer ingredients used in the ion aggregation process of the polyesters will show positive effects when they are released into the soil through a degradation process," Ajou University Professor Lee Bun-yeol said in a statement on October 17. "By utilizing the new plastic material, we can replace conventional mulching films and coated fertilizers to help solve environmental problems."