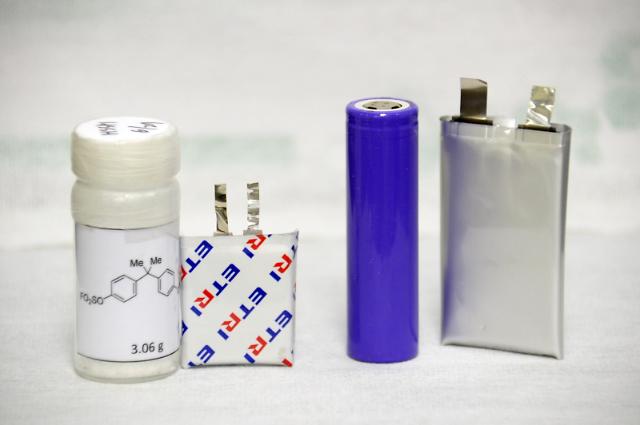 SEOUL -- For the first time in the world, South Korean researchers have developed a fluorosulfate-based flame-retardant electrolyte additive for high-energy lithium batteries used in electric vehicles and energy storage systems.

High-performance lithium-ion batteries are widely used in the world's electric vehicle (EV) and energy storage system (ESS) sectors. However, they also pose a grave threat to human lives and property because electrolytes used in lithium-based batteries are mixtures of combustible solvents. It is almost impossible to extinguish a fire until the battery is all burnt off.

Various additives are mixed with electrolytes to slow down or stop combustion. Phosphoric acid-based flame-retardants proved useful in some cases but they increased the electrical resistance between electrodes and electrolytes to lower the performance of batteries.

Based on an electrochemical test of conventional phosphoric acid-based flame-retardants, researchers from the Electronics and Telecommunications Research Institute (ETRI) have developed a fluorosulfate-based additive that is easy to commercialize as it can be added to electrolytes at conventional battery-manufacturing facilities.

ETRI tested the new additive to find that it not only had 2.3 times stronger flame-resisting ability compared to conventional additives. The additive also enhanced the performance of a high-capacity battery cell built with a cathode made of lithium-nickel, manganese, and cobalt, and lithium metal anode by 1.6 times.

"We will try our best to contribute to the commercialization of fluorosulfate-based flame-retardant additive which would lead to the technological localization of materials, devices, and parts," ETRI researcher Oh Ji-min said in a statement on October 20.