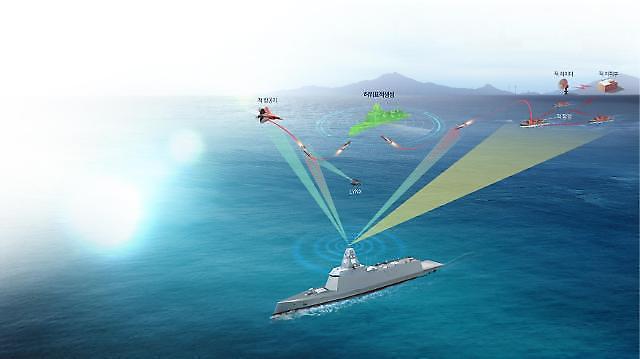 SEOUL -- LIG Nex1 has been selected as a preferred bidder for South Korea's military project to develop a next-generation shipborne electronic warfare system with an improved ability to respond to electromagnetic waves. The system can identify enemy electromagnetic activity early, perform electron attacks at a greater distance, and improve the viability and attack ability of warships.

The Defense Acquisition Program Administration (DAPA) aims to develop a system that can detect, track, and analyze threat propagation signals in a battlefield environment while paralyzing enemy radars and communications. The project costs about 610 billion won ($425 million) until 2036.

It would be the upgraded version of an electronic warfare system called "SONATA SLQ-20" that can be installed on new warships such as KDDX-class (KDX-IV) stealthy destroyers equipped with sophisticated missile-defense systems. The 6,000-ton "mini Aegis" will have cruise missiles, advanced sensors, a missile defense system and stealth characteristics, and multifunction radars to detect missiles, aircraft and the surface of the sea at the same time.

DAA aims to develop a system that detects, tracks, and analyzes threat propagation signals in a battlefield environment. The project costs about 610 billion won ($425 million) until 2036. LIG Nex1 said the new system would be a key device for smart ships.

SONATA SLQ-200 was developed based on the experience of operating American equipment and used for South Korean warships in 2002. The next-generation electronic warfare system would be installed on an integrated mast (I-MAST) that accommodates all major radars, sensors and antennas to maximize the survival and combat power of warships and improve stealth capabilities.