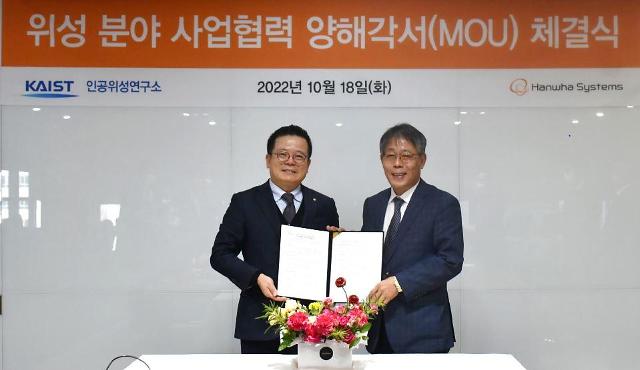 SEOUL -- Hanwha Systems, a key defense contractor involved in the development of antennas and other crucial equipment in South Korea, joined hands with a state-run technology institute to secure core technologies for the development of an ultra-small synthetic-aperture radar satellite that can transmit high-quality and high-resolution earth observation images.

Synthetic-aperture radar (SAR) is a form of radar used to create two-dimensional images or three-dimensional reconstructions of objects, such as landscapes. The image processing of all-weather sensor SARs is gaining importance due to the endless use of high-resolution images, wide-area images, change detection, and 3D images for disaster monitoring and damage analysis.

Hanwha Systems said its technology would be combined with the technology of SaTRec, a satellite technology research center of the Korea Advanced Institute of Science & Technology (KAIST), to develop high-resolution ultra-small SAR satellites. It is part of a government project to operate ultra-small SAR satellites that can be used to establish a military reconnaissance satellite system and collect all-weather image information on the Korean Peninsula and surrounding areas.

SAR creates a ground topographic map by sequentially shooting radar waves from the air and synthesizing the minute time differences reflected by radar waves on the curved surface on a first-come, first-served basis.