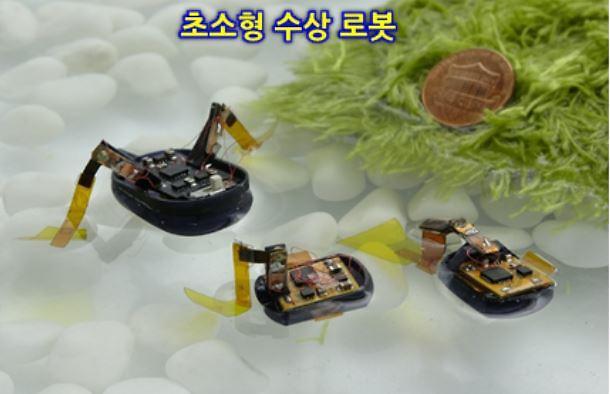 [Courtesy of the Ministry of Scicence and ICT]

Electroactive soft actuators operating at low voltage and power with a high degree of portability and performance are desirable for next-generation robotics based on soft materials. Hydrogels represent an exciting class of responsive soft matter, but their intrinsically slow nature of water diffusion within the hydrogel matrix limits practical applications.

A research team led by Cho Jin-han, a professor of chemical and biological engineering at Korea University, and Koh Je-sung, a professor of mechanical engineering at Ajou University, has introduced an electroactive hydrogel actuator based on wrinkled nanomembrane electrodes driven by electroosmosis that overcame the drawbacks of prior hydrogel actuators, such slow response time, low power density, and poor controllability.

An assembly approach, called "capillary-assisted in situ assembly of metal nanoparticles" was developed to fabricate a hydrogel actuator, providing a facile and effective pathway for the formation of a wrinkled nanomembrane layer with a large surface area and a porous structure on the hydrogel surface.

The high performance of WNE actuators was demonstrated by fabricating untethered soft aquabots, which are 2 cm in body size. "Our soft aquabots based on WNE actuators could be constructed without any high-voltage converter and conventional transmission system, which have considerably limited the miniaturization of soft robots," the team said in a paper published on the website of Science Robotics, a peer-reviewed scientific journal.

"We believe that our approach could provide a basis for developing lightweight, high-performance soft actuators and robots at small scale that require a variety of motions under electric stimuli."