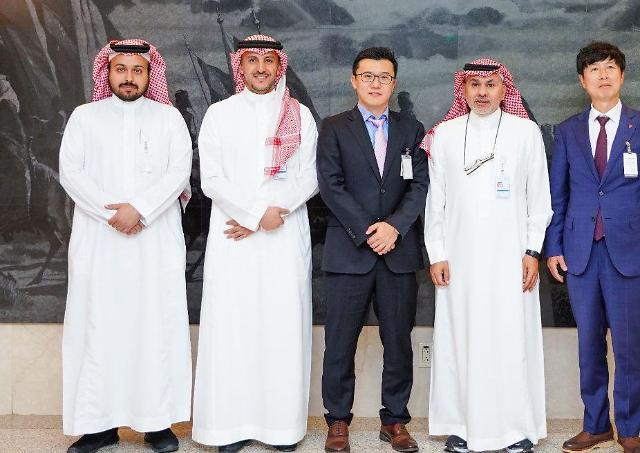 SEOUL -- Lotte Fine Chemical, a chemical unit of South Korea's Lotte Group, will import 50,000 tons of blue ammonia from Saudi Arabia, which has launched a green initiative to reduce its dependence on oil and become a global leader in exports of hydrogen. The deal underlines a deepening alliance between South Korean and Saudi companies involved in hydrogen production.

Lotte Fine Chemical will import 25,000 tons of blue ammonia respectively from ABIC, a fertilizer producer controlled by Saudi Aramco, and MA'ADEN, a Saudi state mining company. Ammonia will be shipped to Lotte Fine Chemical's terminal in the southeastern port city of Ulsan by the end of 2022.

Lotte Fine Chemical, which runs the country's largest ammonia storage facility, has been involved in a national project to develop ammonia-based green hydrogen production technology. As early as 2025, ammonia will be used as a low-carbon energy source for mixed combustion in domestic thermal power plants. "With this world's first blue ammonia supply contract, we have taken a meaningful first step in establishing a global clean hydrogen and ammonia supply chain," Lotte Fine Chemical CEO Kim Yong-seok said in a statement on October 27.

Ammonia is considered an important part of a sustainable hydrogen ecosystem. Blue ammonia is produced in a low-carbon method using natural gas, but with the addition of carbon capture. Green ammonia can be produced through electrolysis powered by renewable energy. The decarbonization of ammonia production is an integral part of the global transition to net-zero emissions.

The International Energy Agency (IEA) predicts that the use of ammonia and hydrogen for ship fuel will gradually increase. However, ammonia is currently mainly produced from fossil fuel-based hydrogen. Lotte Fine Chemical is a member of South Korea's consortium launched in In May 2021 to establish a green ammonia value chain. The company is responsible for the transportation, storage and bunkering of green ammonia produced by POSCO, which is developing technologies to extract large amounts of hydrogen from ammonia and supply green hydrogen produced overseas to power stations and industrial facilities.

Lotte Group said it would contribute to the activation of hydrogen and ammonia by supplying green hydrogen based on ammonia pyrolysis to consumers who need large-scale hydrogen. Ammonia photolysis technology will be used for those who need small and medium-sized hydrogen. Lotte Chemical aims to produce some 1.2 million tons of green hydrogen by 2030.