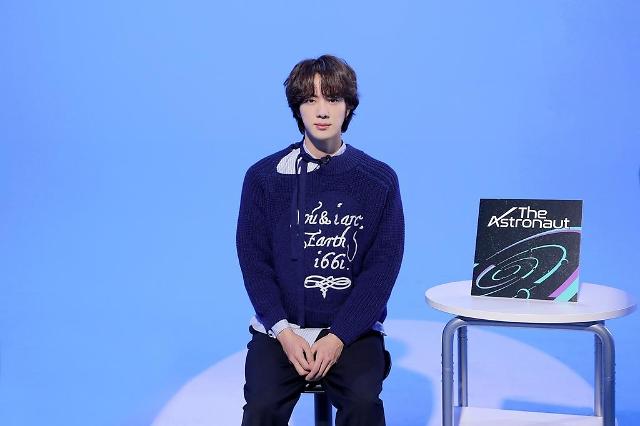 SEOUL -- Jin, the eldest member of BTS, rolled out "The Astronaut," a first solo single co-written by British rock band Coldplay, ahead of his conscription for South Korea's mandatory military service. The pop-rock song will be performed at Coldplay's concert in Buenos Aires.

"The song captures the ears of listeners and the hearts of BTS' fan ARMY as Jin participated in writing the lyrics expressing his fondness for fans," Jin's agency, Big Hit Music, said after releasing a song on October 28. The new single features a dreamy atmosphere with the calming sound of an acoustic guitar and synthesizer sound.

In the music video, Jin was portrayed as an alien who unexpectedly landed on Earth and explores the planet. Coldplay's vocalist Chris Martin plays the role of a news anchor in the video.

Coldplay participated in the song's composition, lyrics and instrumental recording. The five-member British band has previously rolled out a collaboration single called "My Universe" with BTS in both Korean and English. The song garnered worldwide attention, topping the Billboard Hot 100 chart.

Jin was invited as a guest to perform the music to Coldplay's concert scheduled for October 28 in Buenos Aires, Argentina. The concert will be held at the Estadio River Plate Stadium with a capacity of 70,000 people.

The Astronaut is Jin's first solo album after announcing his sudden decision to cancel the postponement of enlistment. Starting with Jin, all BTS members will fulfill the compulsory military service one by one. In South Korea, all able-bodied males aged 18 to 28 should complete their military service for more than 18 months unless they have physical or mental problems.

BTS has collaborated with global pop stars such as Nicki Minaj and Halsey. Nicki Minaj featured in BTS' song "IDOL" in 2018 which ranked at No.11 on Billboard Hot 100. Halsey featured in the band's music video, "Boy With Luv" and performed the song with BTS members at the 2019 Billboard Music Awards.