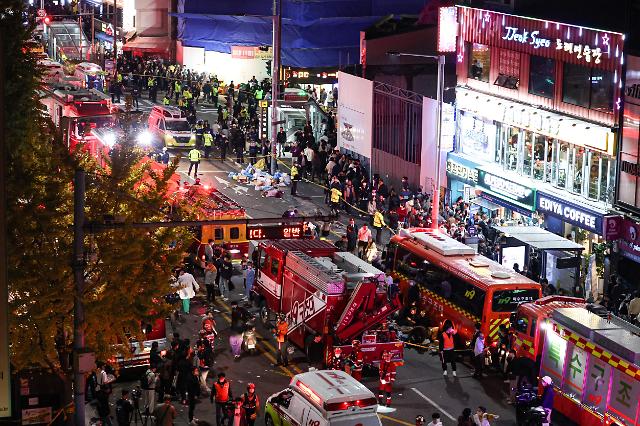 SEOUL -- At least 149 people have been killed and 76 others injured during a deadly stampede in Itaewon, a district near central Seoul, when more than 100,000 people flocked to the party district late at night to celebrate Halloween. Firefighters estimated that the majority of the victims were teenagers and in their 20s.

The tragic accident took place on a Saturday night at about 10:20 p.m. (1320 GMT) when partygoers were flocking to the area near a subway station in Itaewon. Huge foot traffic was bottlenecked in a T-shaped sloped, narrow alley that is about four meters (13 feet) wide. According to witnesses, a person tripped over and more people fell over in human dominos.

According to the National Fire Agency, a total of 149 people, including two foreigners, were confirmed dead as of 06:00 a.m. on October 30. The death toll is very likely to increase as 19 of 76 injured people are in critical condition. “There were many casualties because a crowd of people fell over during Halloween parties,” Yongsan District Fire Department head Choi Seong-beom told reporters.

After the tragic accident on Saturday night, some 300 missing reports were made, Seoul City said. The authorities are finding it hard to identify some of the victims as they did not carry any means of identification. It is common for young South Koreans in their 20s not to have any wallets with ID cards and only carry their smartphone to make digital payments.