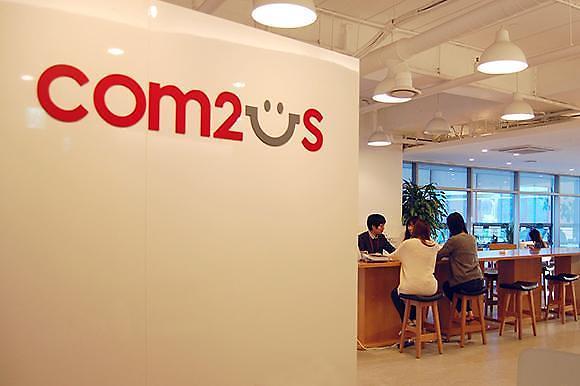 
SEOUL -- Com2uS, a game development and publishing company in South Korea, has secured a 4.2 percent stake in SM, an entertainment powerhouse that has been under pressure from minority shareholders to enhance transparency in governance and accounting. The move comes amid growing attention among market watchers to SM's next shareholders' meeting.

Com2uS said that its investment was based on the judgment that SM has been relatively undervalued and has a high value for future growth, not for the purpose of exercising voting rights at a regular meeting of shareholders in March 2023, when the term of SM's three executive directors and a non-executive director ends.

Com2uS denied its role as a "white knight" for SM founder Lee Soo-man, the biggest shareholder who officially took his hands off producing in October. "This investment was conducted from a neutral position, judging that SM's current stock price is more likely to grow in the future," an unnamed Com2uS official said, citing synergy from each company's intellectual properties and business know-how.

Lee played a key role in turning South Korea's music industry from folk songs and rock music to dance choreography performances based on hip-hop and R&B music in the early 1990s. After conquering the domestic market, Lee turned his head to overseas markets and spearheaded the expansion of K-pop by forming artists such as TVXQ!, Super Junior, Girls' Generation, Shinee, Exo, Red Velvet, NCT, SuperM and Aespa.

However, the 70-year-old came under fire after Align Partners Capital Management, a fund operator based in Seoul, launched a campaign in 2021 to enhance SM's corporate governance, accusing Lee of undermining the credibility and market value of his company by receiving a certain percentage of sales as royalties to his private company every year as SM's executive producer.

SM's board has approved the proposed termination of a production contract with Lee's private company, Like Planning. But Align Partners, which holds a 1.1 percent stake in SM, insists that Lee may seek a way to get involved in album production and business affairs using his deep-rooted influence over SM's current leadership.

Lee has presented a new business vision while seeking joint ventures or investments with information technology startups. Com2uS has strengthened business capabilities in the global entertainment market through the acquisition of a controlling 58.5 percent stake in MyMusicTaste, a one-stop K-Pop platform that provides concert organization services and allows fans to interact with artists.

The acquisition of MyMusicTaste reflects Com2uS' efforts to lead the Hallyu (Korean cultural wave) market in line with the era of digital transformation. Based on big data, Com2uS promised to nurture next-generation artists and promote new businesses such as Metaverse-oriented performance and non-fungible token (NFT) businesses. MyMusicTaste's platform and content will be linked to Com2uS' all-in-one metaverse platform so that various K-pop performances can be enjoyed through virtual reality.

NFT is a unit of data stored on a blockchain network of interlinked virtual ledgers and each NFT is certified by a blockchain as a unique digital asset. Entertainment companies have shown keen interest in NFTs to turn the intellectual property of artists into digital assets that can be displayed and exchanged in fan communities.