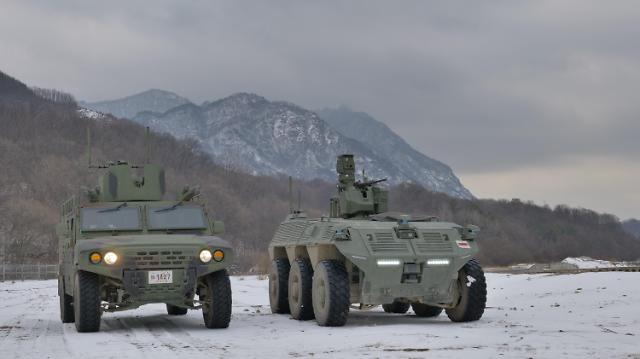 
SEOUL -- South Korea's state defense technology development agency embarked on a military project to complete the development of an unmanned search vehicle for mass production and deployment in mechanized infantry divisions and armored brigades to perform various front-line missions such as search, reconnaissance and vigilance.

The project that requires 28.4 billion won ($91 million) by September 2026 is aimed at developing core infantry equipment for the future battlefield, under the supervision of the Agency for Defense Development (ADD), according to the Defense Acquisition Program Administration (DAPA), a state arms procurement body controlled by the defense ministry.

The vehicle's main functions will be remote driving in low-noise mode, automatic monitoring and tracking, and simultaneous surveillance and shooting missions. An upgraded version will be equipped with various mission equipment such as mine detection devices and communication relay drones.

"By developing the first unmanned search vehicle for mechanized units in South Korea, we will minimize damage to troops and greatly improve the mission capabilities of mechanized units, and further contribute to the development of defense robot technology and the revitalization of the defense industry," Kim Tae-gon, a DAPA official in charge of advanced technology development, said in a statement on November 2.

The unmanned search vehicle is part of a broad military program to develop a future combat system that will combine unmanned and manned equipment. A multi-purpose two-ton unmanned ground vehicle (UGV) developed by Hyundai Rotem has passed a military test operation in front-line border areas. The six-wheeled vehicle with cameras capable of detecting images up to four kilometers away day and night in real-time through monitors was designed as an essential weapon system for reconnaissance.

The upper front of Hyundai Rotem's vehicle is equipped with a remote-controlled weapon station, and its back has a loading box capable of carrying more than 200 kilograms of cargo or transporting patients in case of an emergency. All six wheels are equipped with an in-wheel motor, allowing each wheel to exert independent driving power.

In October 2022, Arion-SMET, an advanced multi-purpose electric UGV developed by Hanwha Defense, was chosen for U.S. performance tests. The two-ton six-wheeled intelligent vehicle was built primarily for supporting infantry operations such as transporting munition and weapons, evacuating the wounded, remote-controlled or autonomous reconnaissance and surveillance, and close combat support.

Hanwha Defense's vehicle capable of driving up to 100km when fully charged has a maximum speed of 34km on unpaved roads. It can carry up to 550kg and features autonomous off-road navigation, autonomous homing, and software for supporting manned and unmanned teaming (MUM-T) operations.

South Korea is trying to secure core technologies for MUM-T, which is the cooperative employment of unmanned assets with traditional manned platforms. MUM-T operations combine the strengths of each platform to increase situational awareness, allowing troops to conduct operations that include combat support and intelligence, surveillance, and reconnaissance missions.