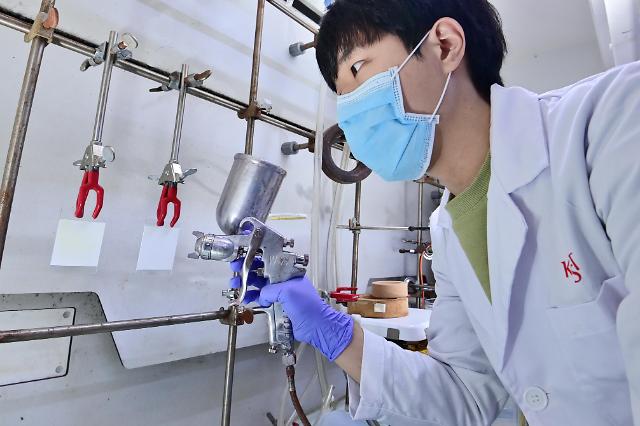 SEOUL -- Researchers have developed a detoxification coating material for chemical warfare agents. The coating material can be sprayed onto equipment or manufactured in form of films and fabric to protect personnel and equipment from toxic substances.

Extremely toxic chemical warfare agents (CMAs) pose a critical threat to humanity as only a small dose could cause critically destructive results. However, protection against such toxic materials is very limited. Carbon-based filters are mainly used in gas masks and air filter systems as counter-CMA measures. However, the toxic agents could also trigger catastrophic results through secondary contamination.

Conventional metal-organic framework (MOF)-based detoxification catalysts are widely used in the military and lifesaving sectors but they are created in a particle-shaped form like sand and could not be applied to flexible materials like the battle dress uniforms (BDUs) or other military equipment.

The Korea Institute of Science and Technology (KIST) said that its research team developed a detoxification coating material based on the team's previous research involving nano-sized zirconium (Zr)-based detoxification agent. The new material is a composite of the detoxification agent and high-polymer supporter material so that it can be sprayed to coat military equipment or created into films.

"This research is differentiated from conventional developments that use the electrospinning method because the new coating material can be speedily sprayed over a large area to coat and remove toxic agents," KIST researcher Baek Kyung-youl said in a statement on November 10. "In case of an emergency, the material can be sprayed onto BDUs to prevent contamination and other equipment for detoxification. We hope the coating material will be able to protect the life and safety of civilians and soldiers."