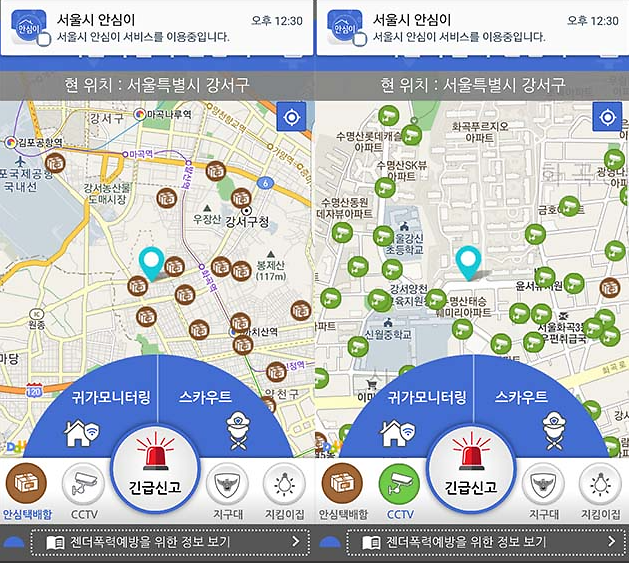 SEOUL -- A personal danger monitoring service will be demonstrated in Seoul to help taxi passengers safely return home. By entering the destination and boarding time before getting on the taxi through a smartphone app called "Ansimi," users can share their location information with the service's control tower in real-time and ask for help in case of an emergency.

Ansimi is a smart safety app that connects about 70,000 closed-circuit television cameras (CCTVs) in 25 districts in Seoul with smartphones. The service launched in October 2018 is connected to the police to immediately handle various crimes including stalking and violence in the streets. Users can report just by pressing the app's emergency report button or strongly shaking their phones. In June 2019, a sexual offender was arrested in 10 minutes through the app.

Seoul said in a statement on November 16 that Ansimi will be linked to some 70,000 taxis registered in Seoul so passengers can quickly report in case of need while riding a taxi. Police officers in nearby areas will be dispatched right away through the information provided by the control tower. After a test run for a month, the service will be officially released in mid-December.

The capital city will also reorganize the Ansimi app service such as providing security guards for 24 hours to help users walking back home alone at night. Previously, the application for security guard service could be made from 9:30 p.m. The security service was used 101,481 times between January and October 2022. Currently, there are about 340 security guards in 25 districts.

"By completely reorganizing the safety app, we will provide integrated assistance services that enhance people's safety to the next level," Seoul's women and family policy division head Kim Sun-soon said in a statement on November 16.