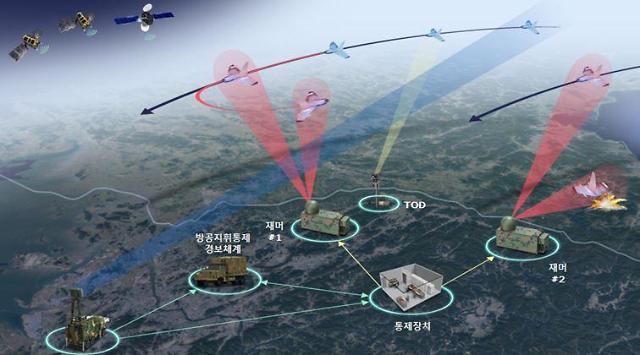 SEOUL -- LIG Nex1 was selected for a military project to develop a jammer capable of disturbing control signals of North Korean drones and getting them off course or into a crash in a "soft kill" manner when they fly into South Korean airspace across the heavily guarded inter-Korean border.

The Defense Acquisition Program Administration (DAPA), an arms procurement agency controlled by the defense ministry, embarked on a project that costs about 24.4 billion won ($18 million) to develop a small unmanned aerial vehicle (UAV) response system by January 2026, led by LIG Nex1. The anti-drone jamming solution will be placed at the forefront to eliminate a security threat by North Korean drones.

Drones and unmanned aerial vehicles (UAVs) are widely used on battlefields and for reconnaissance because of their versatility and costs. A war between Russia and Ukraine has highlighted the tactical value of applying countermeasures to bring down drones penetrating protected perimeters.

LIG Nex1 has proposed the development of drone jammers, citing the accumulation of technologies for navigation jamming, radio jamming and control network jamming equipment. The company has demonstrated technologies through the demonstration of an anti-drone system that has disabled more than 500 drone flights for two years from 2020.

The first stage of DAPA's project calls for the development of a function to get drones out of their path or induce a fall by emitting jamming radio waves after receiving tracking information from radar and an air defense command and control alert system. The second stage is to expand detection and tracking functions with improved radar and image identification.

he jamming solution will be developed for use at home and exports. "When our development is completed, we will greatly improve the mission capabilities of front-line troops to respond to North Korean drones and contribute to revitalizing the defense industry through future exports," Kim Tae-gon, a DAPA official in charge of advanced technology projects, said in a statement on November 22.

U.S. troops based in South Korea operate a portable X-MADIS radar system to neutralize small unmanned aerial systems by combining radar with a radio frequency detection sensor, along with a compact handheld radio frequency jammer called a "drone buster" that
disrupts the control frequency of drones or overwhelms GPS signals.