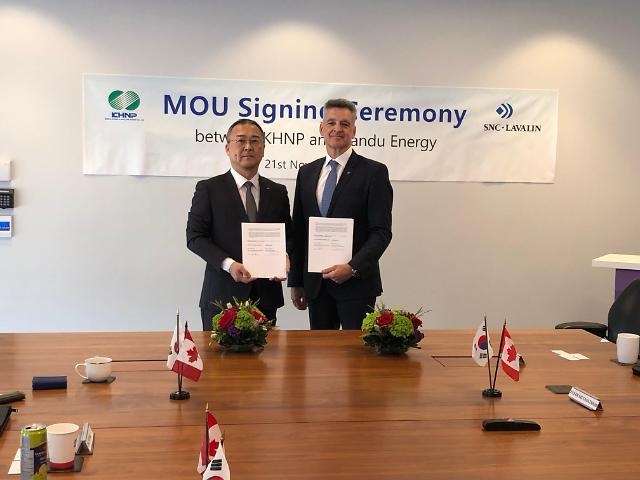 Korea Hydro & Nuclear Power (KHNP), the operator of 24 nuclear power plants in South Korea, has agreed to close the Wolsong-1 nuclear reactor in Gyeongju, about 280 kilometers (173 miles) southeast of Seoul. It will become the world's first heavy water reactor to be dismantled immediately.

The CANDU reactor has used heavy water as its coolant and neutron moderator. Until now, heavy-water nuclear power plants have chosen a delayed dismantling method that waits for decades until plants stop operating and radioactivity falls below a certain level.

Under a memorandum of understanding with Candu Energy, which specializes in the design and supply of nuclear reactors, KHNP will establish a cooperative system for information and technology exchanges while sharing experiences of dismantling nuclear power plants. They will cooperate in digital twin, cutting and radioactive waste disposal technologies.

Digital Twin technology enables the creation of virtual clones of real-life objects and environments. The technology is used to test dangerous equipment or simulate disastrous situations without causing catastrophic damage to the real world. Through its cooperation with Candu Energy, KHNP said it would take a step further into overseas dismantling markets.

South Korea has 24 reactors in operation, which meet one-third of the country's power needs. An aging reactor in the Gori nuclear power complex near the southeastern port of Busan is to be permanently shut down in 2017. South Korea has no experience in dismantling nuclear power plants.

In October 2022, the construction of South Korea's first research institute that would focus on securing core technologies for dismantling decommissioned nuclear power plants began in Ulju, a county about 280 kilometers (174 miles) southeast of Seoul. Construction will be completed in the second half of 2026. Radioactive waste generated in the process of dismantling nuclear power plants requires a high cost of disposal.