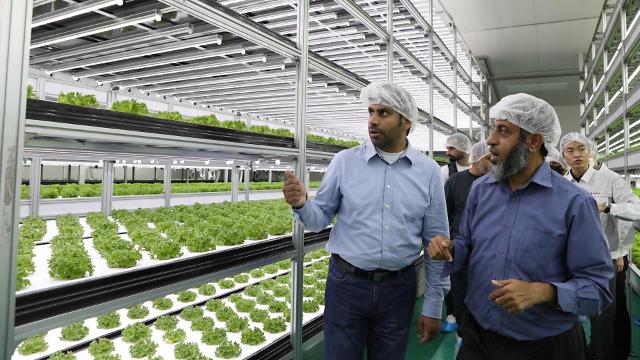 SEOUL -- Nongshim, a food and beverage company in South Korea, will export a container-type vertical smart farm for a pilot project in Oman, which has launched a state smart farm initiative to decrease its reliance on food imports. Nongshim said its smart farm enables crop cultivation up to 18 times a year. Cultivation is possible immediately if only electricity and water are connected locally.

This is Nongshim's first smart farm export since it formed an in-house startup team in 2018 to accelerate its smart farm business. Nongshim said its smart farm export is meaningful in that it has become the first partner of Oman's state smart farm initiative. The $200,000 pilot project involves two 40-foot containers with a total cultivation area of about 165 square meters.

All environmental conditions, including carbon dioxide, light, and nutrients, as well as temperature and humidity, are automatically controlled. Users can monitor and control Nongshim's smart farm anytime, anywhere with a smartphone. Nongshim has developed most of the materials and software such as cultivation facilities, light-emitting diodes (LEDs), and an environmental control system used in smart farms.

With its deal with Oman, Nongshim aims to export smart farm technology to other Middle East countries. "The Middle East is mostly desert, so farming is almost impossible," an unnamed Nongshim official said in a statement on November 23. "As most countries there rely on imported food, their interest in smart farms has been increasing, so there is a very high possibility of market growth."

A smart farm is an automated indoor farm created by combining information and communication technology with agriculture. Because smart farms can automatically analyze temperature, humidity and the amount of sunlight using the Internet of Things (IoT) technology, farmers can grow plants without having to worry about weather conditions. Remote management is possible through mobile devices such as smartphones. Smart farms can help reduce labor costs and increase productivity.

In October 2021, South Korea's greenhouse-type smart farm optimized for tough climate environments was constructed in Kazakhstan to grow vegetables including tomatoes and cucumbers.