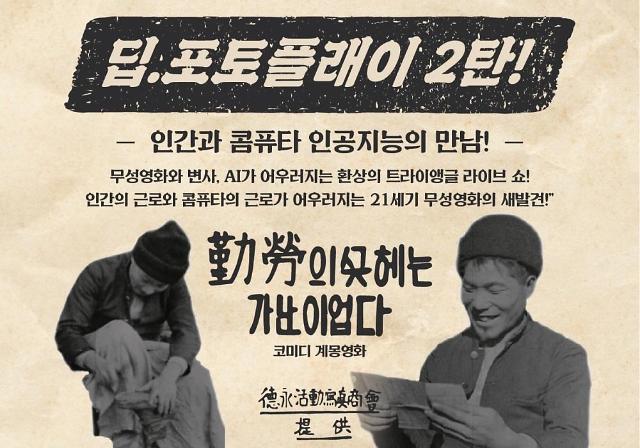 [Courtesy of the Korea Film Archive]

SEOUL -- Soundtracks of a silent film created in a joint project between artificial intelligence composers and humans will be demonstrated at a cinematheque in Seoul. Soundtracks were created based on scenes from a silent comedy, which was titled "There is No Poverty at the End of Labor" and released during Japan's colonial rule.

According to the Korea Film Archive, the live music event will be held on November 28 at Cinematheque Seoul Art Cinema, a non-profit cinematheque in central Seoul.

Human workers created soundtracks after an AI composer analyzed the vibe from movie scenes. The silent film, which was presumed to be produced by a Korean director in the 1920s, highlights the importance of hard-working attitudes with various slapstick comedy features. The film depicts two characters living under imperial Japan's colonial rule.

The adoption of AI composers has gained momentum in South Korea's entertainment industry. In October 2020, Hayeon, a singer-songwriter known as a younger sister of Girls' Generation's Taeyeon, released her debut single titled "Eyes On You" through collaboration with South Korea's first AI composer EvoM developed by the Gwangju Institute of Science and Technology.