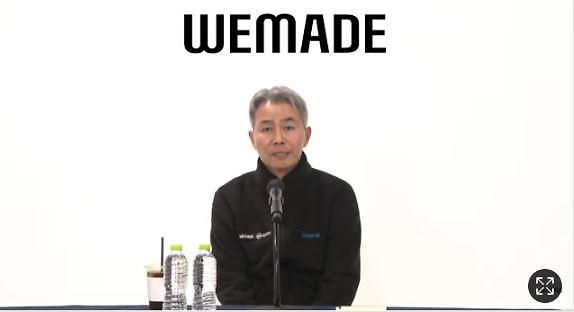 
SEOUL -- The founder of South Korea's online game developer WeMade warned of legal action against a death verdict given by a coalition of domestic crypto exchanges led by Upbit to delist the native token of the company's blockchain ecosystem, saying that such an "unfair" action should not impede the establishment of a digital economy platform.

"I think it's very unfair," WeMade CEO Henry Chang said in an online press conference on November 25 with tears in his eyes, a day after the Digital Asset eXchange Association (DAXA) formed by Upbit and four other crypto exchanges decided to terminate contract support for the token of WeMix, a blockchain gaming platform, and delist it from December 8.

DAXA ruled that WeMade has failed to address a significant difference between the disclosed number of tokens in circulation and their actual volume in the market, without providing timely and clear information to investors. "There was an unusual situation where it was difficult to grasp important information because of several corrections or modifications... and to restore trust in management capabilities," the coalition said in a statement.

Chang argued that he had sincerely responded to requests and concerns raised by DAXA and corrected problems. He threatened to apply for an injunction to suspend the execution of DAXA's decision, accusing Upbit and other exchanges of applying excessive standards only to WeMix while there are still many other coins that have not revealed their distribution plans at their entry stage.

"I won't just watch this kind of Gapjil and unfairness. We will do our best to correct this problem, including legal action," Chang said in an angry voice. "Gapjil" is a Korean term that means an abuse of power such as mistreatment, arrogant behavior, crude talk, character assassination, and insults. "I'm not saying that WeMade did nothing wrong, but it's about the unfair application of standards," he said, adding that legal action is inevitable to help investors keep their transactions going.

Despite a drastic fall in the price of WeMix, Chang stressed that there is no change in WeMade's blockchain business. "I think the global exchange is becoming increasingly important because the axis of our business has already gone global," he said, vowing to go ahead with talks with Binance, the world's largest cryptocurrency exchange, and Coinbase, an American cryptocurrency exchange platform operator.

DAXA's decision is certain to fan skepticism over the operation of "Play and Earn" or "Play to Earn (P2E) games in South Korea, which has yet to approve P2E blockchain games. P2E games are usually powered by a blockchain, offering rewards and incentives to users based on their platform activity or related in-game achievements. As users earn cryptocurrency based on their gaming activities, they can exchange them for assets on exchanges.

Even after DAXA's prior warning created anxiety among many individual investors, WeMade attracted 66 billion won ($46 million) from Shinhan Asset Management, Kiwoom Securities and Microsoft in early November. Some 21 billion won would come from Microsoft.

WeMade, which created "The Legend of Mir," a free-to-play fantasy massively multiplayer online role-playing game, has vowed to actively invest in building a global digital economy platform. Through cooperation with game developers, Chang aims to introduce 100 blockchain games that use WeMix tokens as the key currency. He has presented an ecosystem, in which the inter-game virtuous cycle economy operates with a blockchain network-based non-fungible token (NFT).

Starting with the launch of its WeMix 3.0 mainnet on October 20, WeMade has released a reserve stable coin and a decentralized financial service. NILE, a new economic platform that combines NFT and a decentralized autonomous organization, will be unveiled through technological advancement. The mainnet was developed to create a public chain where games, decentralized finance protocols and other blockchain services can smoothly transition and join the network.