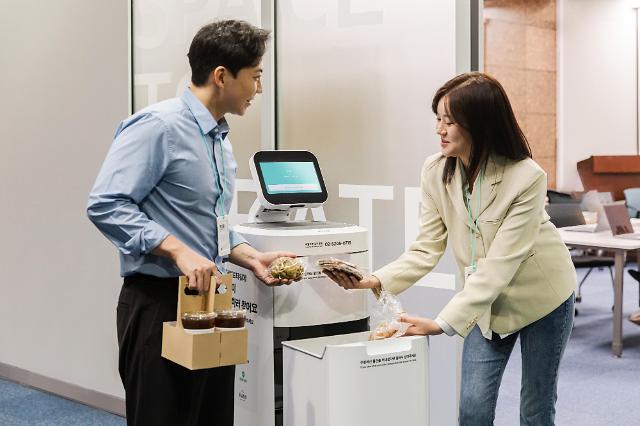 Woowa Brothers has developed Dilly, a lineup of serving and food delivery robots. Serving and food delivery robots have been deployed in controlled environments, while the operation of outdoor self-driving robots has been allowed only for demonstration or in special regulatory zones. Some Dilly models communicate with elevators so that they can move up and down floors.

Woowa said that six self-driving robots called "Dilly Tower" were used for a door-do-door food delivery service at COEX Mall, a shopping mall complex that is about the size of 17 football fields. Trade Tower, a 54-floor building with some 3,600 working people, is part of the complex.

Dilly Tower, an improved version of Dilly, is capable of traveling between floors through elevators inside high-rise office buildings. The cabinet-shaped robots will pick up food and drinks from COEX Mall restaurants and deliver them to those working at Trade Tower. Woowa said that it takes up to 30 minutes for a Trade Tower worker to get down to the underground shopping mall and grab a coffee. A smartphone app can track the location of delivery robots in real-time.

Woowa said its door-to-door (D2D) robot delivery service focused on enhancing customer convenience. "We are able to introduce indoor delivery robot services at COEX Mall and Trade Tower, which are visited by tens of thousands of people a day," Woowa's robot business head Kim Yo-seob said in a statement on September 24.

Woowa aims to introduce a delivery robot that combines indoor and outdoor driving with floor-to-floor movement technology. The company's final goal is to produce robots capable of roaming freely through crowded urban streets.

"We are going through a step-by-step process to launch robot delivery services in Gangnam. We are currently in talks with various building owners in the area to allow robots into premises," Baedal Minjok spokesperson Jeong Young-seok told Aju Business Daily on November 28. Jeong said that when the system is complete, robots would be able to deliver food from stores to the doorsteps of offices and studio apartments.