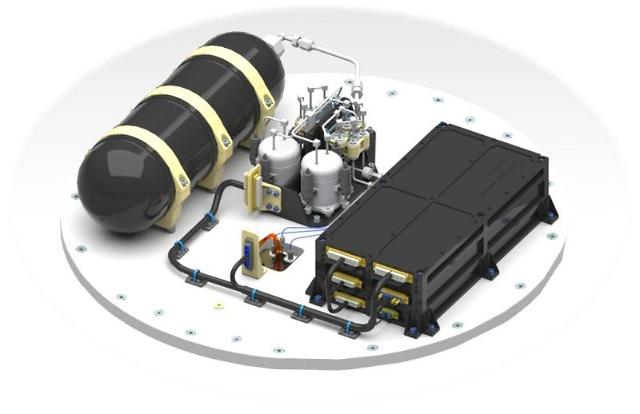 SEOUL -- A research center run by South Korea's defense technology development agency has localized a small high-efficiency electric propulsion system capable of adjusting the orbit of about 150 kilograms (330 pounds) of satellites. It can be used for bigger satellites through improvement in propulsion power.

The Defense Industry Technology Center (DITC) has tied up with Satrec Initiative (SI), a satellite manufacturing company controlled by Hanwha Aerospace, to develop an electric propulsion system, which is a key technology for miniaturizing satellites by reducing the amount of fuel and space. American and Russian satellites have used electric propulsion for decades.

Compared to a chemical propulsion system, DITC's electric propulsion system can reduce the amount of fuel onboard by one-fifth and reduce power consumption due to its high power conversion efficiency. Core components can be modularized and efficiently placed inside the satellite, providing a concise interface. Parts were selected in consideration of the operating environment and designed to be suitable for extreme launch environments and orbit.

The new propulsion system ionizes fuel into electrical energy using a Hall-effect thruster that operates on a variety of propellants, the most common being xenon and krypton. The applications of Hall-effect thrusters include control of the orientation and position of orbiting satellites and use as main propulsion engines for medium-size robotic space vehicles.

South Korea has benchmarked SpaceX to launch a broad space program called "Space Pioneer" aimed at creating a self-sustaining industrial ecosystem. Domestic companies will be supported to build a supply chain using homemade parts as much as possible with the aim of establishing a web of low-orbit satellites.